Aussie rockers Black Aces have announced their new guitarist Brett Tyrrell who is replacing rhythm guitarist Jarrad Morrice. Tyrrell plays in the AC/DC tribute band Thunderstruck and joins frontman Tyler Kinder, drummer Pete McMillan and bassist Alex McMillan in the Black Aces. Morrice was part of the Black Aces when they released the albums, Shot In The Dark (2016), Anywhere But Here (2017) and Never Change EP (2019).

The following message was posted on the Black Aces‘ Facebook page yesterday (on April 27, 2022): 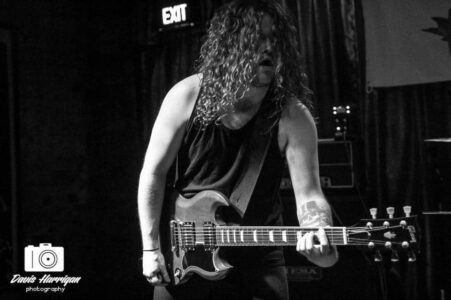 We are very pleased to introduce Brett Tyrrell as Black Aces new guitarist.

Bretty has been a good mate of the band for many years, is a stellar guitar player and we couldn’t think of anyone better to step into the fold.

Catch us all at a show real soon!”

Earlier this month, the Black Aces announced the departure of their guitarist Jarrad Morrice on their Facebook page:

“STATEMENT FROM THE BAND:

“It is with heavy hearts that we make this statement, but sadly Jazz is leaving Black Aces. We’ve been through thick and thin, played countless shows, toured across the globe and released music that we’re bloody proud of… and we’ve done it all together. Jazz leaves us as not just a mate, but a brother, Jazz will always be a part of the Aces family.

We wish Jazz the very best for the future.”

“Words cannot do Justice for all we have been through together, I love the whole Aces family, fans and friends alike. Keep your eye out, because I couldn’t be prouder of what they will be releasing later this year. I came as a friend and left as a brother.