Black Aces drummer Pete McMillan was recently interviewed by Australia’s Bombay Rock. McMillan was asked what has been the proudest accomplishment for the Black Aces so far to which he replied: 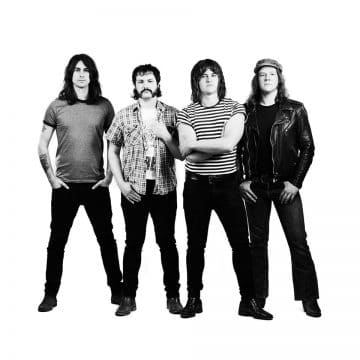 “One that sticks in my mind is the first time we played at Hard Rock Hell Festival in Wales. We were playing the smaller stage in a pavilion of sorts, and Ratt were playing the main stage at the same time. We kicked off our set and there was a fairly decent crowd, but by no means was the area full. When I play I usually just put my head down, keep on eye on Alex our bassist and get stuck in, I don’t take too much notice of the crowd. After 3 or 4 songs I remember looking up and the place was packed. The vibe was unbelievable. Apparently word had got around that there were these crazy Australians goin nuts and putting on a show, and apparently people were leaving Ratt on the main stage to come watch us, it was mental. Still one of the best shows I’ve been part of. The crowd was loud. However the best part was straight afterwards. We’d come off stage absolutely buzzing, and the head of festival came straight up to us and said he wanted to get us back next year and put us on the main stage. We flipped. That was a great point for us, as that also led to us signing with out label.”

Bobby Blotzer‘s Ratt and the Black Aces both played the 10th edition of Hard Rock Hell Festival at the Haven Holiday Resort in Pwllheli, Wales on November 12, 2016.

It was pointed out to McMillan that the Black Aces have toured the UK and Europe countless times and have worked with legendary producer Mark Optiz (AC/DC, INXS). In regard to whether he ever saw the Black Aces climbing to that level, McMillan advised: “It’s a strange one really. I was only just thinking about this the other day. As you go along you just see the band as the band and don’t often take stock, time to reflect on where you’ve been, as you’re always looking forward going, “Right, what’s next!?” But if you had have told 11 year old Pete, who’d barely even held a pair of drum sticks, that one day I’d be playin’ in Glasgow in front of a packed house of rowdy Scotts, or burning down the Autobahn with my best mates in Van packed with gear headin’ to another show, or recording with a guy that’s worked with Angus Young and Bon Scott, there’s no way in my wildest dreams I’d have thought such a thing possible. However, as far as we’re concerned we’ve got a very long way to go yet, AC/DC knew what they were talking about, ‘it’s a long way to the top’, ain’t that the truth!”

You can read the rest of the interview with Pete McMillan at Bombay Rock‘s website.