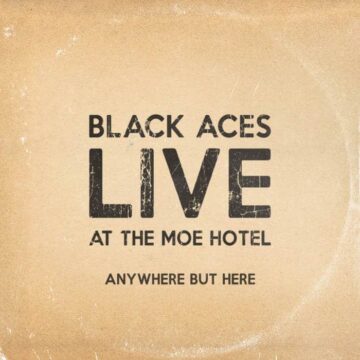 “Here it is folks, Black Aces performing the track ‘Anywhere but Here’ live at Moechella festival May 2021 at the Moe Hotel.

Been a while since we stepped on a stage, at the moment we can’t even get in the same room together, as we imagine it is for a lot of you here in Oz, so we thought we’d remind you of what live Aces sounds like!

Sleaze Roxx stated the following in its review of the Black Aces‘ 2017 album Anywhere But Here: “What Anywhere But Here delivers a little differently this time around for Black Aces is that while retaining an AC/DCinfluence, they are starting to confidently step out from under the AC/DC shadow. This is still straight ahead fun hard rock but I’m hearing some riffs that are perhaps Pete Townsend influenced in a few tracks. Just listen to the main riff on “Run For Your Life” and “Good Woman Gone Bad” and you’ll hear what I’m talking about. Tyler Kinder and Jarrad Morrice deliver irresistible guitar-work while Kinder‘s voice retains the shrieking power displayed on all their prior releases.

Of course, there are still obvious AC/DC licks in here such as the extremely powerful and goosebumps-inducing “Show You How to Rock and Roll” which perfectly launches the album. This song alone is worth the $10.99 they’re charging for the album on iTunes. “Cut Me Loose” has some ingredients borrowed from 1970’s Bon Scott-era antics. The album’s title track “Anywhere But Here” is the lead-off single and video and really does showcase what this album is all about.”