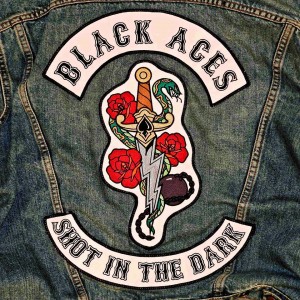 Australian hard rockers, Black Aces, will be releasing their first full-length album entitled Shot In The Dark on January 29, 2016.

Sleaze Roxx has stated the following in its review of Black Aces‘ Shot In The Dark: “Whether Black Aces borrow too heavily from their counterparts Airbourne or not, one thing is for sure. Black Aces are very good at what they do and that is play straight up ass kicking and faster paced AC/DC influenced rock n’ roll. Considering that Airbourne are one of the best bands to have come out in the last decade, having another band that plays similar type rock n’ roll is cause for celebration! If you like Airbourne, you are most likely going to love Black Aces‘ Shot In The Dark.”

“If Australian rockers Black Aces know one thing, its that rock n’ roll is a like a good pair of jeans – when you put them on it feels so right, and a great set will last forever.

Giving less of a nod, than a sweaty cheers to the hard rocking 70s bands of Australia and beyond, Black Aces had been storming up and down the width and breadth of their homeland for over 5 years before releasing their debut record Shot In The Dark in early 2016. Loaded with anthems-in-waiting and a no bullshit delivery, Black Aces have beaten a path to rare ground on their debut record- a hard rock band that manages to both stomp and swing. The release culminates a year that saw the band whip around their homeland with abandon, sinking beers and pleasing ears with a live show that has seen them garner support slots from- and make fans out of- certified rock royalty including Cosmic Psychos, Dallas Crane and The Casanovas, along with several thousand now hearing impaired punters.

2016 will see Black Aces return to Europe for a lengthy tour in support of their debut record, picking up where they left off after their whirlwind 2013 UK jaunt that helped them catch the attention of French label Bad Reputation. With a guitar in hand and a chip on their shoulder, this denim clad 4 piece is ready to take rock and roll to every person who’ve ever loved a good pair of jeans, one pub at a time.

Pounding out blistering rock’n’roll that you can’t help but bang your head and punch the air to, you will find it hard to leave a Black Aces show without a smile from ear to ear.”