With their debut full-length studio album Shot In The Dark landing at #7 on Sleaze Roxx’s Top Ten Albums of 2016, the Black Aces have announced that their sophomore record Anywhere But Here will be released via UK label Off Yer Rocka in November 2017. 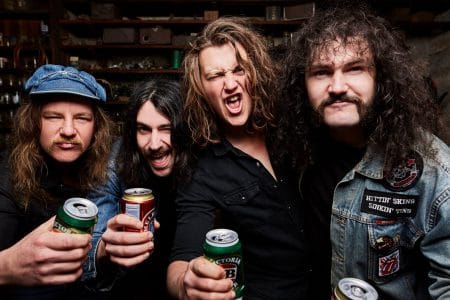 “We a bloody stoked to announce we have signed a deal with UK based Off Yer Rocka Recordings!!!

Black Aces return with their second album “Anywhere But Here“, set to be released worldwide this November through UK label Off Yer Rocka. Co-produced by the legendary Mark Opitz (AC/DC, INXS, The Angels, Kiss) and Colin Wynne (Bad//Dreems), “Anywhere But Here” sees Black Aces deliver 11 tracks of raw, unadulterated Aussie Pub Rock. Black Aces have delivered on the promise of their barnstorming 2016 debut “Shot In The Dark“, with work starting on their second record whilst still touring the first. “When we left Australia to tour Europe and the UK in September last year, we already had 20 or 30 songs floating around for the second album,” says lead singer and lead guitarist Tyler Kinder.

After a stunning performance at Hard Rock Hell Festival‘s Xth Anniversary last November, HRH & OYR CEO Jonni Davis knew that Black Aces were a sound that would do well on Off Yer Rocka, and here they are. The new album will make your balls vibrate, no doubt about it!

More to come folks, so keep ya eyes peeled!”