Swiss rockers Black Diamonds consisting of frontman Mich, bassist Andi, drummer Manu and guitarist Dee have unveiled a lyric video for their single “Pieces of A Broken Dream” to tidy their fans over while the release of their new album is postponed to 2021. The group was founded in 2004 and has released the albums First Strike (2008), Perfect Sin (2013), Once Upon A Time (2017) and Live In Nottingham (2018).

“With a heavy heart we have to postpone the release date for our new album to 2021. But rest assured: it’s worth the wait. 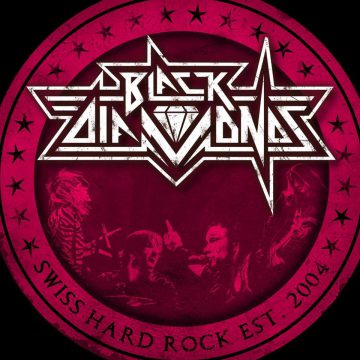 To sweeten the waiting time, we put out a little lyric video for “Pieces Of A Broken Dream.”

Never stop dreaming, never give up hope and stay healthy!

We look forward to see you all again soon.

The group’s Biography on its website indicates (with slight edits):

From the stages to the basement and to inspection

Following the release of the previous album «Perfect Sin» in 2013 the eastern Swiss based rock band set out to a 2-year long «Perfect Swiss» tour through Switzerland and the adjacent countries. Around 30 festival, hall and club shows were played, some as support act for example for Kissin’ Dynamite. In 2016, the Black Diamonds decided to reduce public appearances to work on new songs and finally get their tour bus through vehicle inspection, since it would not convince the controller during the appearance in the Swiss TV series «Pimp it or kick it».

The sheep in wolf’s clothing

Nobody tells more compelling and intriguing stories than life itself. The new album «Once Upon A Time» is a hard rock fairy tale, which is reflecting daily madness and is taking the listeners on a thrilling roller coaster ride through the most dazzling and dustiest corners of their fantasies. Captivating grooves, badass guitar riffs and melodic singalong-choruses are trademarks of the record. Again, Tobias Lindell and the Bohus Sound Studios based in Gothenburg Sweden (ABBA, Europe, In Flames, a.m.m.) took over the responsibility for the mix and mastering process.

Early 2017, the Black Diamonds signed a long-term record deal with AOR Heaven. The German label officially released «Once Upon A Time» in March 2017 as a CD across Europe and worldwide in digital form.

In Fall 2017, the Black Diamonds set out on a European Tour supporting the swedish rock band H.E.A.T. During three and a half weeks, not less than 18 concerts were played in 10 different countries. The tour included cities such as Kopenhagen, Milano, Paris, Madrid, Barcelona, London, etc. that were known to the band as holiday destinations only so far. In accordance with an album full of stories, the show in Nottingham (Rescue Rooms) was recorded. The album «Once Upon A Time – Live in Nottingham» was finally released in June 2018 as a strictly limited CD.”