Very sad news as Black N’ Blue and Ratt drummer Pete Holmes has announced today that his wife Annette passed away  losing her fight to cancer.

The following message was posted by Holmes on his Facebook page earlier today (with slight edits): 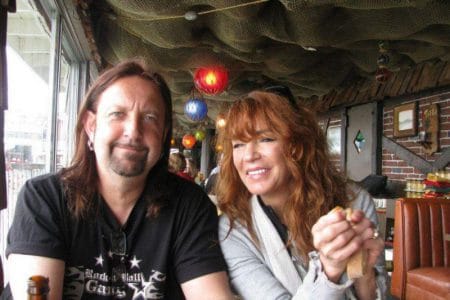 “I’m forever heart broken and so sad to say that my beautiful wife, soulmate and friend lost her fight with cancer early this morning, she fought hard, was afraid but did everything she could to fight back, but could not beat this vicious disease.I will miss and honor you the rest of my days, I love you too much….”

Back in or about February 2017, a GoFundMe campaign was started to raise funds to assist Holmes‘ wife Annette in raising funds while she battled an aggressive form of breast cancer. The sum of $15,000 was raised through the GoFundMe campaign.

Full In Bloom reported that part of the GoFundMe campaign indicated:

“What started out with a small lump two months ago, has turned into two surgeries, a lumpectomy, mastectomy and repair to damaged skin surrounding. Annette has aggressive breast cancer. She will start chemo Aug 15th, every two weeks, for 16 weeks. There will be a follow up visit and shot after each treatment. As soon as she is strong enough, she will have her second mastectomy. She is in good spirits and determined to not let cancer win.”

“Pete has had to forgo any opportunities to work. Countless doctor visits and changing her drains and bandages and making sure Annette’s needs are met 24/7 have thrown him into the role of caregiver. A nurse comes in once a week to check on them but it is Peter carrying the load, the heavy responsibility. Their healthcare insurance is minimal, almost nonexistent, as is the case with many musicians. There’s no FMLA nor compensation for this huge undertaking and his being away from the working world. They have depleted their savings and the stress is taking a toll emotionally, as you can imagine….and they have only just begun to fight this battle.”

Sleaze Roxx sends its condolences to Pete Holmes and his family.