Hair metal rockers Black ‘N Blue have officially announced that Bobby Capka is their new guitarist to replace Shawn Sonnenschein who was let go from the band shortly after the Monsters of Rock Cruise West back in early October 2016. 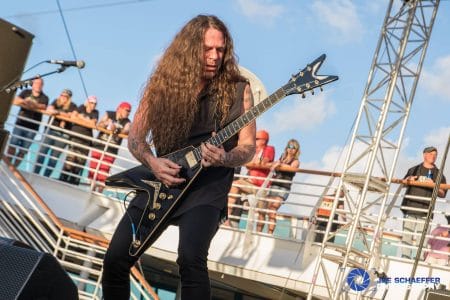 Capka has been playing with Black ‘N Blue for some time. Sonnenschein was recently interviewed by Sleaze Roxx and stated in that regard: “They hired another tribute guitar player to come in and cover — Bob Capka. Great guy — I know him.”

The BNB World is Happy to Announce Bobby Capka as our New Guitarist completing the Guitar Onslaught with Brandon Cook.

Jaime St James, Patrick Young and Pete Holmes along with Bobby and Brandon, are Fired up and Ready to Play Live in 2017.

Bobby Capka grew up in Portland Oregon and started playing guitar when he was about the age of 6 years old. In the early 1990’s he started playing guitar full time playing 6 nights a week until around 2000 when his band Craving Theo got signed to Columbia Records/Sony Music label and was touring with bands such as Sevendust, Drowning Pool, Godsmack & Three Doors Down.

In 2012, Bobby was hired to play guitar for the Metal band, Vicious Rumors, playing on albums such as Live You to Death & The Electric Punishment and touring all over South America, Brazil, Argentina & Europe playing numerous festivals and club gigs with other Metal bands such as Saxon, Accept, Anthrax & Testament. Bobby has played on two cruises, in 2014 he played on The 70,000 Tons of Metal Cruise for Vicious Rumors and in Feb 2017 The Monsters of Rock Cruise for Black N Blue.”