Black ‘N Blue consisting of frontman Jaime St. James, bassist Patrick Young, drummer Pete Holmes and guitarist Brandon Cook have a new bandmate / guitarist by the name of Doug Rappoport who is replacing Bobby Capka who first joined the group in or about April 2017. 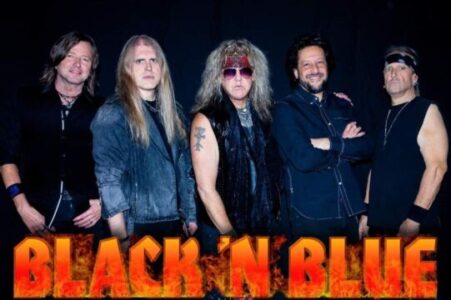 “Doug Rappoport is a British born, American-raised guitar player. His style is deeply-rooted in the Blues while utilizing a more modern hard Rock tone and approach.

His guitar playing skill sets and knowledge base are being compared to legends from Jimi Hendrix and Eric Clapton to Eric Johnson and Eddie Van Halen.

Doug‘s rapidly growing popularity is attributed to a blend of modern guitar techniques combined with classic phrasing and melodic sensibilities harkening back to the masters, all rolled into a unique style that is unmistakably his own.

Touring extensively with Edgar Winter for 11 years as well as guitar legend Rick Derringer plus sharing stage and studio with a who’s who of renowned artists, he has honed aggressive chops, confident stage presence and overall pro savvy through substantial road experience.”