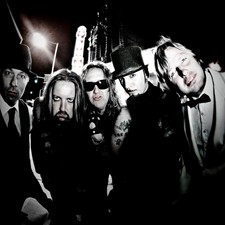 The long-awaited Black ‘N’ Blue album ‘Hell Yeah’ is finally done at getting close to being released — it will be the band’s first studio album since 1988’s ‘In Heat’.

Says vocalist Jaime St. James, “I’m going to have the official release date for our new CD ‘Hell Yeah’ soon! The artwork is done and it will see the light of day soon… God damn it is great! I want you all to hear it!

I’m no longer the Warrant party master but Black ‘N’ Blue is ready to take on the world when our new CD ‘Hell Yeah’ is released this May on Frontiers Records!”

80’s hard rockers, Black ‘N Blue, released four successful and critically acclaimed albums through Geffen Records including their self-titled debut (1984), “Without Love” (1985), “Nasty Nasty” (1986), and “In Heat” (1987), with the latter two albums produced by the legendary Gene Simmons of KISS. The band, which featured Jaime St. James (vocals), Thommy Thayer (lead guitar, and currently performing with KISS as the replacement for Ace Frehley), Jef “Woop” Warner (guitar), Patrick Young (bass), and Pete Holmes (drums), started in Portland, OR as a group of friends that came together to make their mark on 80’s hard rock. The band eventually relocated to Los Angeles and was signed to Geffen Records.

Black ‘N Blue would go on to sell over a million albums throughout their tenure in the 80’s. The band scored a hit single in “Hold On To 18” (which was featured on the group’s first release), a track that is widely known as a hard rock classic and still garners airplay on stations across the country. In addition, the band toured relentlessly with the likes of KISS, Aerosmith, Queensryche, Yngwie Malmsteen, among other platinum acts.

In early 2003, vocalist Jaime St. James reformed Black ‘N Blue. Along with St. James, original members Warner and Young began recording a new album titled “Hell Yeah!” Recording of the album came to a halt when Jaime St. James joined Warrant as their new lead vocalist in February of 2004. Jaime has been touring the world with Warrant for the past four years.

In 2008, plans to get back into the studio and finish the “Hell Yeah!” album are underway, as well as festival appearances and other touring. The new album is described as “classic” Black ‘N Blue as heard on the group’s original recordings and promises not to disappoint.