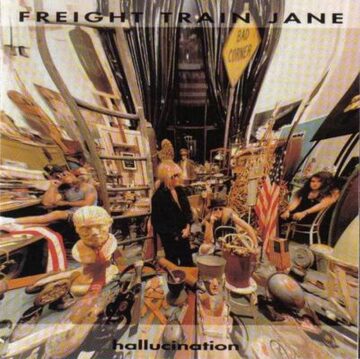 With respect to his time in Freight Train Jane, St. James stated: “Well, that was what I did when I got out of Black ‘N Blue. I said, “I’ve got to find a guitarist. I think I’m going to have to a one guitar band.” I had done the two guitar band thing for most of my life, so I said, “I want one guy to play guitar.” And so the guys from White Lion actually helped me find the bassist and drummer. They actually came to my house on motorcycles and sat down and had all the gear. I had a drum kit. I had the Marshall amps. They would come over on their bikes. I had a BMW motorcycle. I think maybe they’d come over to my garage, we’d set up and play. So, Tommy Bolin was recommended to me, and he walked in and he was nuts. I said, “Well if I want to go crazy, that’s the guy.” I mean, he was all over the place. So that was it. I mean, we had Dave on drums and Scotty was playing bass. And we started writing songs. By the time we did the record, Dave ended up out of the band and that’s where Skip Teaze came in on drums. We only did the one record. That came out in 1994. By the time that came out, I mean, nothing happened. It went nowhere. For guys like me, it was not a good time and I wasn’t about to change. I was not putting on flannel and combat boots. No, that’s not my style. You see the jumpsuits I wore? Forget it. [Laughs].”