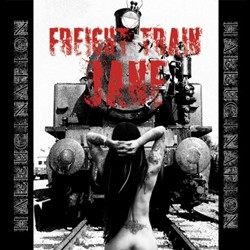 FnA Records has released a small run of 100 CDs of the Freight Train Jane release entitled ‘Hallucination’ at fnarecords.net. Each CD is individually numbered by an authentic security hologram sticker and autographed by lead singer Jaime St. James. ‘Hallucination’ features brand new artwork, but the same classic album that fans have tried to find for years due to its limited availability.

Jaime St. James is in raw form on ‘Hallucination’ and is a treasure for those who own this post Black ‘N Blue album. In the words of Jaime St. James, “After the break up of Black ‘N Blue I decided to put together a new band. This time it would be a four piece. I wanted a ‘guitar guy’ so I auditioned a lot of guitarists. At first I wanted to play with Mitch Perry but he had a lot going on back then, so guys came and went. Guitarists, drummers, and bass players all filtered through. If you have never held auditions then let me tell you, it’s a crack up and it’s hell all at the same time. Usually you know if a guy is right for you within the first two minutes, but you’ve got to give them a little time, after all they are giving it the old I’m scared shitless but I’m going to go for it routine.”

“Tommy Bolan (from Warlock) came in on 11. This guy had so much energy I thought he was going to ignite. I decided he was the guy,” continues St. James. “On bass I ended up with Scotty Werner, a damn good friend and a solid foundation at the bottom end. Davy Jones was the original drummer and to use his words “and I can sing like a bird” so that was it. Now the ugly truth is this was around 1992/93 and we were heading into a huge storm called Grunge. We played gigs around the L.A. area and we were damn good, but the timing was wrong. Frustration eventually set in. Davy and I had an argument about something I don’t even remember, and we replaced him with Skip Teaze. I secured a Japanese record deal and brought in my trusty pal Pat Regan to run the studio. The CD came out great. I still love “American Fame”, “Voodoo”, “Hallucination” and “No More” is so dark and cool to me. I still see the CD’s on the road from time to time for a long awaited signature and a hand shake. It’s always cool when someone tells me they like this disk. Also the guys in the band are still playing music and I wish them luck.”

The album is now available from fnarecords.net in an extremely limited edition printing. Jaime St. James has OK’d a special limited pressing of 100 units and has graciously autographed each one of them. Get yours before this gem is gone!