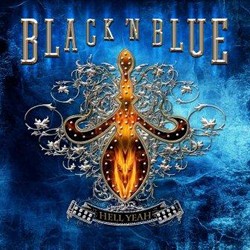 Frontiers Records is excited to announce the release of the new album from Portland-based rockers Black ‘N Blue on May 13th in Europe and May 17th in North America.

“Hell Yeah!” is a proud comeback statement for a band that wrote the pages of hard rock history in the 80’s. Black ‘N Blue released four successful and critically-acclaimed albums through Geffen Records: their self-titled debut (1984), “Without Love” (1985), “Nasty Nasty” (1986), and “In Heat” (1987), with the latter two albums produced by the legendary Gene Simmons of KISS. Catalogue sales in the US were in excess of one million units and the band’s original guitar player Tommy Thayer went on to replace Ace Frehley in the current KISS lineup.

Black ‘N Blue reunited for the first time in 2003 under the initiative of singer Jaime St. James, when he began writing tracks for a new album along with original member, Jef “Woop” Warner. The process came to a halt when St. James joined Warrant as their new lead vocalist in February of 2004. In recent years, Jaime has been releasing records and touring the world with Warrant.

In late 2008, plans to get back into the studio and finish the “Hell Yeah!” album were underway, as well as festival appearances and other touring. “The band’s line-up is all original except Shawn Sonnenschein”, tells Jaime St. James “but he has been in the band now for about 8 years. Still the new guy… Jeez!”. Black ‘N Blue recently joined the ever-expanding roster of Frontiers Records.

“Hell Yeah!” goes back to the roots of the “classic” Black ‘N Blue sound, mixing tight and hard rocking songs with a sleazy attitude. “This new album is a real thrill for us and all of the BNB fans” says St. James. “Our last studio recording was in 1988 so it’s a big deal. This is a classic BNB-sounding CD and could be described as a cross between all our previous records. It is heavy for the most part, but I like to think it reminds me of our first album. That’s why we brought back the original logo. We just modernized it”.

Black ‘N Blue will make a special live appearance at the M3 Rock Festival at the Merryweather Post Pavilion in Columbus MD on May 14th. More shows and festivals to be announced.