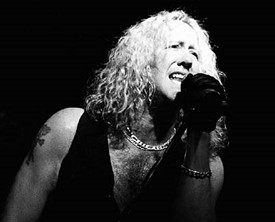 It took Black N’ Blue over twenty years to release the follow-up to ‘In Heat’, and judging by a recent interview their next studio album could take just as long.

Although the band haven’t slammed the door on recording new music, singer Jaime St. James recently told Oregon Music News that, “Things are so different than the old days. ‘Hell Yeah!’ took so long to record and it’s not like it used to be when we were in our 20s when that was all we did. We have so much more going on in and out of music. It’s discouraging when people will wind up downloading it for free. That’s a year of my life that someone just took for free.”

What about a live album then? “I would have to say no at this point and I’ll tell you why,” continued St. James. “That’s (‘One Night Only’) just a great sounding record, we struck gold on that one. We brought in Pat Regan to Portland along with all of this gear — we did it right. It sounds great. There are some songs on that live album that blow away the studio versions. I don’t know that there’s a need to do that again, you know?”

St. James was also asked about KISS bassist Gene Simmons ripping off Black N’ Blue on the ‘Revenge’ album. “When I heard the song “Domino” I was like “Oh come on!,” laughed St. James. “I talked to him about that. I said to him, “I know where you got that riff.” He looked at me and said, “I absolutely ripped you guys off, 100%. No question about it! Yes I did.” That’s pretty much where we left it. That was Tommy’s riff on the tune “Nasty, Nasty.” Turnaround is fair play, though, because there’s a song on ‘Nasty, Nasty’ that I’ve been told sounds like a song on KISS’ album ‘The Elder’. I’m not familiar with that album very well at all so I couldn’t tell you. It’s a part that Gene wrote so he ripped himself off! It’s kind of a messed up thing!”