Black Sabbath announce dates in early 2016 for “The End” tour

Black Sabbath have announced North American dates for “The End” tour. The band’s farewell tour has been billed as the last tour for the original band members, Ozzy Osbourne (vocals), Tony Iommi (guitar) and Geezer Butler (bass), together as Black Sabbath.

Black Sabbath released their studio album 13 back in mid-2013 which was the first group effort featuring Osbourne, Iommi and Butler in 35 years but it did not include original drummer Bill Ward. Sleaze Roxx stated in its review of 13: “If there is one CD that has received more hype, drama and interest leading up to its release, it has to be Black Sabbath‘s latest CD 13 — the band’s first release in 35 years with the ever crazy but loveable Ozzy Osbourne. Having been named one of the most influential bands in the history of rock ‘n’ roll and the founders of the heavy metal genre by numerous heavy metal legends including Rob Halford of Judas Priest, all eyes were on Black Sabbath to see whether they could live up to their legend and back catalog of amazing doom and gloom heavy music.” Sleaze Roxx concluded that: “…Black Sabbath has proved with 13 that they still have a lot of game and cemented why the band is widely recognized as the founders of the heavy metal genre.”

Black Sabbath ended up doing a very successful tour behind 13 with drummer Tommy Clufetos handling the drum duties. Sleaze Roxx stated in its review of the band’s Toronto stop: “I could not tell from the box how engaged the crowd really was but other box attendees commented after Black Sabbath‘s set that this was the most engaged crowd they had ever seen at the Air Canada Centre. Thank you Black Sabbath for a great show — very impressive for three guys in their mid-60s!” 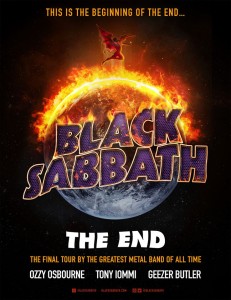