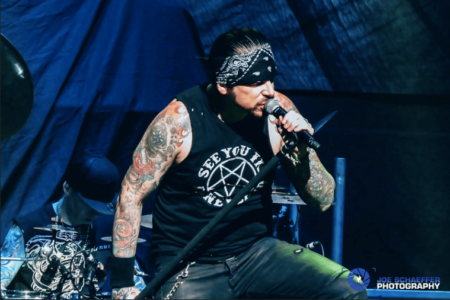 Warwick was asked about the status for both Thin Lizzy and Black Star Riders.

With respect to Black Star Riders, Warwick indicated: “Well, we were supposed to be in the studio now, doing album number five, but obviously pandemic-wise, we can’t do that. The album is demoed, but we probably won’t get in to record it until early 2022 now, with everything that’s going on. So, we’re on a bit of a hiatus until then, until I guess, we get back in the studio. But it is written, and it’s ready to go! We have a title, and we have everything, so we just need to get it recorded.”

In terms of whether there is anything planned for Thin Lizzy in 2021, Warwick stated: “I think there is, I’ll be honest with you. It’s Scott’s thing, and I tend to stay out of it, because I don’t feel it’s up to me to really get involved in that, because it’s Scott and Brian [Downey], and whatever’s left of that entity, and letting them decide what to do. I mean, if Scott calls me and there’s shows and he wants me to sing; I’m there with bells on. That’s a given, and Scott knows that. But, I mean talking to Scott, I think, absolutely, there’ll be some more shows down the road. Scott loves playing those songs, and why shouldn’t he play those songs? So, I’m sure there’ll be something coming up.”

You can read the rest of the interview with Ricky Warwick at eonmusic‘s website.