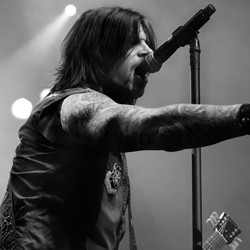 The first release will be an entirely acoustic album called ‘Hearts On Trees’, who’s theme will be being true to your roots and what people sacrifice for their homes. The second will be a full on electric rock album Warwick has entitled ‘When Patsy Cline Was Crazy (And Guy Mitchell Sang The Blues)’, in which the singer promises “there will not be an acoustic guitar in sight on that one!”

The campaign was launched on Valentine’s Day, and your chance to be a part of history is available at www.pledgemusic.com/projects/rickywarwick.

Warwick has once again tapped the dream team of Joe Elliott and Ronan McHugh to assist him in bringing both of his new solo records to fruition. Warwick chimes in, “As I was writing these songs, they tended to polarize. Some songs were clearly rockers and some tapped into my folk background. So, why not make two records!”

There will also be a several special guests participating in these releases. Def Leppard’s Joe Elliott adds, “Well, it’s often said, things go in threes. So after confirming that we’re going to be working together on the Black Star Riders’ second album, I’m thrilled to be able to work with Ricky again on his upcoming two solo albums. Having produced his first two albums it’s fair to say we have a great relationship and as friends and fellow musicians that allows us a great opportunity to make some very memorable and important music.”

Ricky Warwick made his thunderous impact on the music scene in 1988 as frontman for one of the UK’s darling son bands, The Almighty. He stepped it up in 2010 when he joined veteran rockers Thin Lizzy, taking over vocal duties from the iconic Phillip Lynott. When Thin Lizzy evolved into Black Star Riders in 2013, Ricky was a keystone to BSR’s success. In addition to all of this, Warwick has also been creating his own solo music for years and has toured all over the world in support of his first three releases. His solo albums allow Warwick to explore new musical avenues and those songs are very near and dear to his heart.