The Black Star Riders have released another video in support of their third studio album Heavy Fire and this time for their song “Dancing With The Wring Girl.” 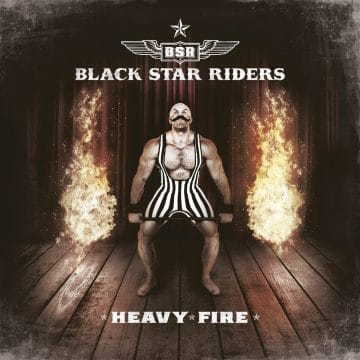 Sleaze Roxx stated the following in its review of Heavy Fire, which included the song “Dancing With The Wrong Girl”: “Black Star Riders deliver an honest, gritty rock effort. The songs here continue to combine Gorham‘s signature, very Lizzy-like playing with Warwick‘s aforementioned very honest lyrical delivery. After a few listens of songs such as “When The Night Comes In,” “Thinking About You Could Get Me Killed,” “Dancing With The Wrong Girl” and the very catchy title track, they immediately stick in your head and stay there quite a while. This is not a record that needs to grow on you. It hits off with a listener very quickly. The interesting thing is that the majority of the record, songwriting wise, is a collaboration between Warwick and guitarist Damon Johnson. I was surprised that the only songs Gorham contributed were the title track and “True Blue Kid.” There is one track when even the bassist, the man who has seemingly played in almost all reunited ’80s LA rock acts, Robbie Crane has a writing credit.

All in all, although it seems for the most part a Warwick/Johnson written record, it has its Thin Lizzy vibe all around it. So the style stayed pretty much the same as in the band’s previous releases. As with Black Star Riders‘ previous releases, there does not seem to be a really standout weak track here. In my opinion, all of them are solid.”