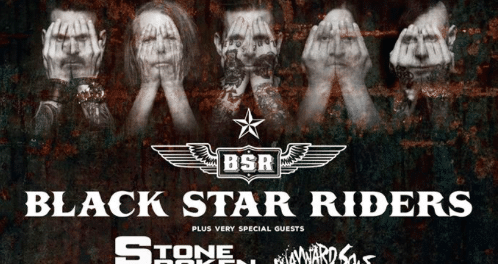 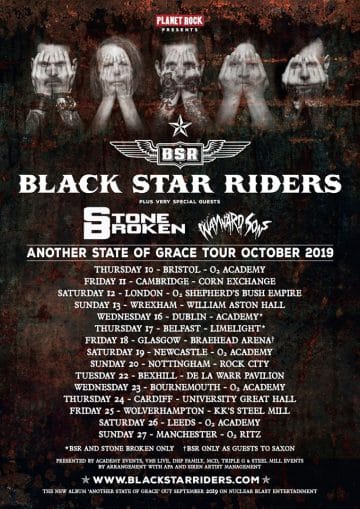 The band will support the record with a full UK and Ireland tour in October 2019 with additional dates in other territories to be announced in the near future.

Ricky Warwick: “I’m absolutely thrilled to be back with a brand new Black Star Riders Album. In my honest opinion this is the best record the band has made! This is Christian and Chad’s first album with the band and they have brought a fantastic energy and vibe”

Scott Gorham adds “It was great to be back in Los Angeles and recording with Jay Ruston was an absolute pleasure. I am excited to see everyone’s reactions to this amazing record … and I can’t wait to get back on the road and play you these new songs!”

The band previous album, “Heavy Fire”, was released in 2017 and enjoyed widespread fan and critical acclaim. The album enjoyed success in many countries and went on to score multiple high chart placing’s & radio playlists. They toured extensively in support of the release with notable appearances on the SOLD OUT Rock Legend’s VI cruise out of Florida, alongside Sammy Hagar and Bad Company and very successful tour of North and South America with metal legends Judas Priest.

Following on from their previous albums ‘All Hell Breaks Loose’, ‘The Killer Instinct’ and ‘Heavy Fire’ which have paved the way for Black Star Riders to be recognized as a power force in the modern day of Rock n’ Roll, ‘Another State of Grace’ will be once again released by Nuclear Blast Entertainment.

After a lengthy period off the road, Black Star Riders are back with a 15 date UK & Ireland Tour with special guests Stone Broken and Wayward Sons.

Ricky adds re the tour: “I’m also very happy to have our friends in Stone Broken and Wayward Sons on the bill with us. A tour of epic proportions… not to be missed!”

* BSR and Stone Broken Only § BSR Only as Guests to Saxon

Tickets are on sale from 10am Friday March 8th.
There will be a special Pre-sale at 10am on Wednesday March 6th for Planet Rock Radio Listeners via the following link:
http://planetrock.gigantic.com/black-star-riders-tickets-pr…

See you all there!”