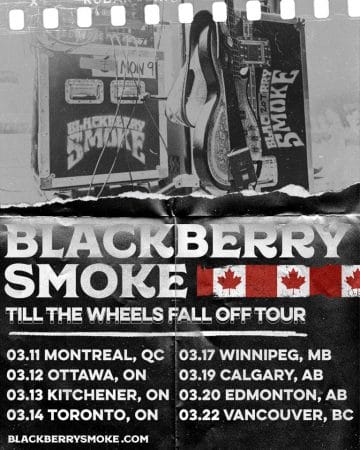 this March as the group has just announced a cross-country tour throughout Canada dubbed the Till The Wheels Fall Off Tour. Indeed, there is a distance of over 2,800 miles between Blackberry Smoke‘s first Canadian tour stop in Montreal, Quebec on March 11th and the last one of their tour in Vancouver, British Columbia on March 22nd.

Blackberry Smoke – You Got Lucky (Live from Southern Ground)

Follow us on Spotify to learn about new releases first: http://smarturl.it/der3ebPRE-ORDER THE SOUTHERN GROUND SESSIONS at www.blackberrysmoke.com or bbs.ear…