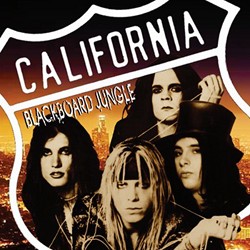 Blackboard Jungle and Demon Doll Records are at it again. This time bassist Britt Pennella and guitarist Dave Zink have unearthed the rarest of jewels from the Blackboard Jungle vaults — twenty more tracks for your listening pleasure from one of Hollywood’s most beloved bands.

The new CD ‘California’ has arrived and it is bursting at the seams with everything from the first two songs ever recorded by the boys, “Thrill Generation” and “Three Days Straight”, to the very hard to find tracks “All My Friends”, “Wavelength”, “Dust, Hurricanes & Arson” to the Brent Muscat produced “Caroline”, “Hip Lil Thing”, “You And Me” and the Dead Or Alive cover of “You Spin Me Round”. If that weren’t enough… Demon Doll Records got theirr mitts on two songs from the Marlboro recording sessions and three live tracks from a sold out Coconut Teazer show in 1994. This stuff is epic in every way and Demon Doll Records are proud to be a part of finally getting it to the masses.

Now that the trilogy is complete, it is time to light up a Marlboro Red, kick the top off a bottle of Tequila and sit back and enjoy the ride that only Blackboard Jungle can take you on. Crank this baby up as it will shatter glass and that our friends was the intention from the beginning.

All in all, ‘California’ is so thorough in completing the Blackboard Jungle legacy, it is a must have for any fan of the late eighties and early nineties Sunset Strip scene. Grab your copies early and often at demondollrecords.com as the label will be opening the record at an introductory price of $12.99 for the first two weeks of release.