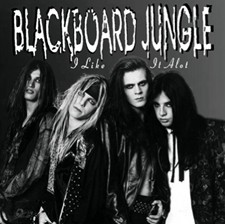 Blackboard Jungle Release 19th Anniversary Edition Of ‘I Like It Alot’

You asked for them, we got them. Demon Doll Records are proud to present a classic record from arguably one of the hottest bands to ever grace the Sunset Strip – BLACKBOARD JUNGLE!!

You wanted ‘I Like It Alot’ – we got it. You wanted never released studio and live tracks – we got them.

Blackboard Jungle and Demon Doll Records have teamed up to bring you the official 19th Anniversary edition of the cult smash hit ‘I Like It Alot’. This version is brimming with 19 killer cuts, spanning over 74 minutes – it is one large triumph for Hollywood Rock ‘N’ Roll!

The album that gave us such great anthems as “Chicago” and “Paint You A Picture” is back, digitally restored and remastered with 7 bonus tracks that will blow your mind. Produced by Faster Pussycat’s Brent Muscat and originally released in 1991, this album has been long out of print until now. Also included are the never released studio tracks “Car I Can’t Drive”, “Shade Of Fall” and “Slave” which are worth the price of admission alone. If that weren’t enough, we are offering a LIMITED EDITION COVER as well as the original cover and artwork.

Pick up your copy today and join the masses! This album is silver pressed and exclusively available at http://demondollrecords.com/Blackboard_Jungle_-_I_Like_It_Alot.html.

Also available: pick up a 12 x 18 poster of the BBJ Boys to hang on your wall. Available in the poster section of the Demon Doll Store.