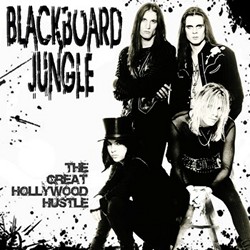 Never before released material, out of print material, songs from the ‘America Now’ split release, B-sides, singles — you name it… it’s on this new CD.

Arguably one of the Sunset Strip’s biggest bands of the early 90’s, Blackboard Jungle did not stop putting the pen to paper or hit the off switch in the studio after the release of ‘I Like It Alot’. The songs kept flowing and boys kept recording. They hammer out some serious thunder with the cuts “Minute”, “Pollination”, “Angry Young Boys” and “Love”, flip the switch with the mind altering and unbelievable “Sister” and bring it all back to the Strip with “Laughing With You Again” — and that is just the tip of the iceberg. If you like Blackboard Jungle then get ready to strap in for an overload of the senses as they are on their games and taking names.

Grab your copies early and often as Demon Doll Records will be opening the record at an introductory price of $12.99 for the first two weeks of release. ‘The Great Hollywood Hustle’ can be purchased and previewed at demondollrecords.com/blackboard_jungle/blackboard_jungle_the_great_hollywood_hustle.