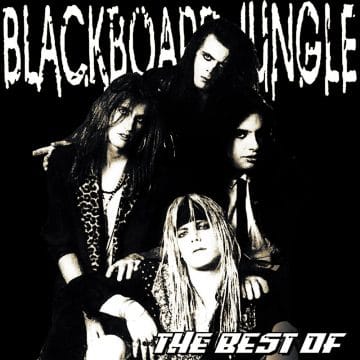 “Blackboard Jungle is back with the release of ‘The Best of‘ compilation now available on all streaming platforms. The official release is brought to you by a brand new promotional/management company Neon Nights Entertainment which is headed up by DDR Music Group principal and Platinum Overdose founder and producer Lance. V.

Jump into your favorite platform and spin some of Blackboard Jungle‘s best tracks including the well known “Chicago”,  and “Paint You A Picture” as well as killer rockers such as “Minute”, “All My Friends” and “Sweet Elaine”. Neon Nights has also re-released the video for “Sound of Our Lives” on their YouTube channel with remastered audio. Their is also a page dedicated to the band at http://neonnightsentertainment.com/blackboard-jungle with an official bio as well as other merch from the band. All Blackboard Jungle official CD releases are available through the DDR Music Group.

Lance V. explains “We just got this company up and running, so there’s a lot more content coming from all the bands we’re representing, as of now Blackboard Jungle is up and running and we’re working with our other clients which I personally hand picked to get everything right. I looked at it as a chance to jump in the saddle with some of my favorite bands in the business and reintroduce everyone to their music again with offical biographies, videos, live footage and anyhting else I can dig up that I think the fans might be interested in. 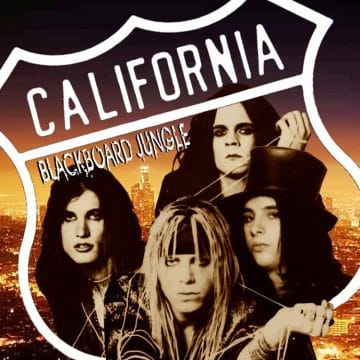 “Britt Pennella and Kenny Price officially started their first band in their home state of New Jersey which would be called Ritzz. The band played the local club circuit and found themselves sharing the stage with other New Jersey fan favorites Trixter. After cutting their teeth in the Jersey scene, Britt and then Ritzz drummer Jamie Scrap wanted to take their chances in Paradise City and bought themselves a one way ticket to Los Angeles in 1988 and have never looked back.

Six months later, Kenny Price would also roll the dice and make the trip to L.A. to join forces with his former and soon to be again bandmates. The original guitar player of Ritzz would also join them from New Jersey but after a few months it seemed he couldn’t take the heat of the L.A. scene and eventually moved back to New Jersey leaving Ritzz without a guitar player. One fateful trip by Britt to San Francisco would find him crossing the street to get to the infamous nightclub The Stone which led to a chance encounter with a guitar player named Dave Zink. They talked, exchanged numbers and upon the departure of their original guitar player Britt decided to make the call to recruit Dave to the project.

At the behest of drummer Jamie Scrap, the band changed its name to Filthy Ritzz. Their first show was the midnight mope up duty slot at The Roxy on the same bill as The Zeros. Here on the Sunset Strip simply playing in front of a few die hard Glam Metal fans (mainly girls) gave the band the taste it needed to forge on a fantastic ride that would take many twists and turns along the way. One unfortunate event is that Filthy Ritzz never got to record a demo as Andy McCoy from Hanoi Rocks essentially took the whole band to back his new project at the time entitled Shooting Gallery.

Shooting Gallery had its fair share of drama and madness and Britt made the decision it was not really for him and left the unit, Dave Zink and Jamie Scrap ultimately stayed on with Shooting Gallery for an extended period of time but did not wind up on the major label release. In the meantime, Kenny had recruited a manager and wanted to put something together and Britt was elated to have the opportunity to reunite with his original singer and Dave followed suit upon his departure from Shooting Gallery. After auditioning many a drummer, Joel Faith blew them away with his unique style and Blackboard Jungle was officially born.

The band was renting a typical run down Hollywood apartment and befriended scenester, manager and club promoter Dezi Benjamin (who appeared in “The Decline of Western Civilization Part II: The Metal Years). Dezi would eventually bring The Runaways producer and co-founder Kim Fowley to the crash pad to meet the guys. In order to work together, Kim required Britt write 15 songs a day, every day until he was satisfied. After many days and nights of writing, that day did finally came and Kim took them all to the Rainbow Bar and Grill for a victory dinner and told them “to keep it on a cheeseburger level, bitches!” Robin Zander of Cheap Trick happened to be at the famous establishment that night and walked over and congratulated the band on having the opportunity to work with Kim Fowley. 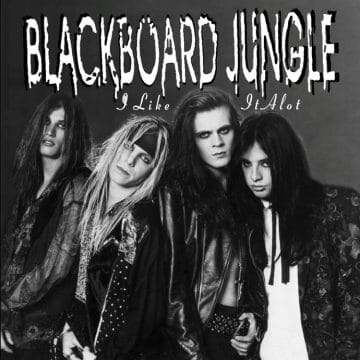 The band’s first show as Blackboard Jungle would be at the Coconut Teaszer in Hollywood which was full of A&R Reps from every major label at Kim Fowley’s invitation. Their first recording session netted them the fan favorite song “Caroline” which would later be released by the DDR Music Group on the album entitled ‘California‘.

The person’s ear they caught the most was Faster Pussycat guitarist Brent Muscat and as the crowds grew so did Muscat’s interest to produce the band and release a 12 song album through his and Greg Wartel‘s start up record label Church Records. The album ‘I Like It Alot’ as well as their most popular song “Chicago” would become their calling card. Britt fooled us all for decades with the lyrical content of their biggest hit. Instead of the song being about the windy city located in the great state of Illinois, it in fact was written about a girl named Chicio with whom Britt would fall madly in love with while on tour in Japan.

“I Like It Alot” was released in 1992 to much critical acclaim and the band quickly made plans to hit the road with Faster Pussycat as support for the “Whipped” album tour in 1992. They trekked across the USA for the entire summer and actually lived to tell about it.

After the end of the tour, an up and coming music attorney named Danny Hayes took a large interest in the band and got them involved with Fox network’s television show “Good Day L.A.” and the show’s search for the best band in Los Angeles. Out of the thousands of bands that were looked at, Blackboard Jungle proudly took first prize and was awarded a record deal with Fox Records. The hitch about the label is no one even knew if it really existed as the entire deal just disappeared into thin air. Although the deal never materialized, it did bring the filming of the video for the song “Sound of Our Lives” with Brett Bradshaw from Faster Pussycat taking over the drumming duties after the departure of Joel Faith.

The band would play their last two shows in 1996, one at The Troubadour and one at The Roxbury in West Hollywood with Incubus who was still and up and coming band at the time.

After 8 long years, it was finally over and Blackboard Jungle had definitely left their mark on the Sunset Strip scene forever and for those lucky enough to witness it, you know what you saw. For those that weren’t there the memories will forever live on through the music, they certainly will never be forgotten.”