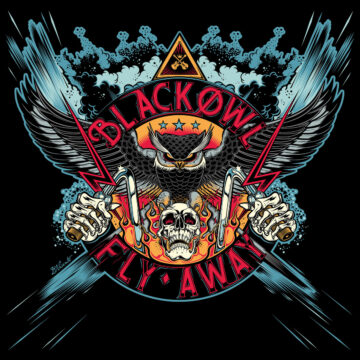 Fly Away finished at #4 on the Sleaze Roxx’s Top Ten Albums of 2021 to which Sleaze Roxx stated:

“Spanish rockers BlackØwl are the surprise of the year for me. As I was writing this, I was wondering how I became aware of BlackØwl in the first place but upon reviewing my review of their album, I realized that it’s none other than Sleaze Roxx reader Roger Miranda (also known as Jherson Roger Miranda) who once again made a recommendation that made the Sleaze Roxx’s Top Ten Albums of the Year. Previous recommendations made by Miranda include Overdrivers‘ She’s On Her Period (#3 in 2018) and Prospect‘s Rock ‘N’ Roll Beats And Electric Guitars (#6 in 2019). In any case, Miranda did it again. If you like AC/DC with Brian Johnson at the helm, odds are that you will simply love BlackØwl. I know that Sleaze Roxx readers really liked AC/DC‘s latest album Power Upsince it finished at #2 on the Sleaze Roxx’s Top Ten Albums of 2020, but BlackØwl have, in my humble opinion, delivered the album that you really want to hear from AC/DC. Tracks such as “Smoking Rock ‘N’ Roll”, “Napoli Street” and “Welcome To Rockerdale” are absolute scorchers and I already can’t wait to see what BlackØwl come up with on their next album.”