French rockers BlackRain will be releasing their new studio album Dying Breed on September 13, 2019 and the record can be pre-ordered via the band’s website. 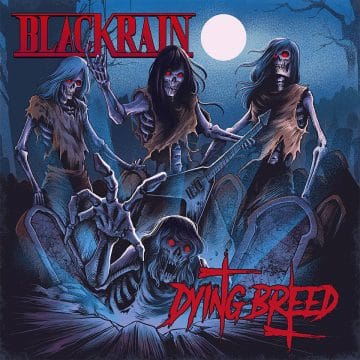 “BlackRain is a band of dudes that play together since they were in high school. First they started by covering their idols like Metallica, Iron Maiden, Pantera, etc. But the real beginning of BlackRain is the day they’ve signed their first contract with a crappy label, the 6th June 2006. We don’t tell you lies, the 06/06/06 is the date at the end of the first contract they’ve signed. As in “Phantom of the Paradize” they felt like signing with the devil. Maybe it’s the reason why Swan, their leader, decided to take the name of the character of this movie.

Their first touring experience was in Japan, in August 2006. They knew nothing about the stage, about the way of behaving in front of a crowd. Like in “The Karate Kid”, they’ve been taught how to rock by the local agent that took care of them. Uchida, it was the name of this guy, was totally pissed off by the band he first saw on stage. He taught them how to move, how to do a set list, how to talk to people, how to correctly play the song that he loved on the album.

Every night, they were ending in a bar called The Current, in Shinjuku. There, they discovered a lot of new bands like Hardcore Superstar or the first Crashdïet album. Even if they were a pure heavy metal band, they discovered new bands that were playing a kind of music with catchy chorus, inspired a bit from the 80’s spirit, but with a modern view. They precisely knew at this moment  this was the way they had to take.

Back in France, they worked on a first real album (they never considered the “thing” they released with the crappy label as an album). “License to thrill” was born, in 2008, followed by a lot of Rock’n’Roll gigs in Europe. They even finish in Tunisia, by playing in front of kids for who it was the first time they saw musicians wearing eyeliners. The national TV invited them but at the last moment, the presenter decided not to let them played, fearing a kind of revolution in the country. Well, the revolution occurred few years after but not because of the band. By the way, this was the most crazy time in BlackRain’s life. Everything seemed possible. The youth went wild. The parties was so hard, too hard maybe. They finished this period with no more money and no more job. How to go on ?

At the end of 2009, they met a manager that helped them to reach a new level. This guy was tough with the band, making no compromise on the way they were playing. BlackRain was rehearsing every day. This was hard, the guys were often pissed but they finally had time to work on what they loved : music. The second album, “A Lethal dose of…” was a bit save from a terrible recording in Swan’s room. But they also had the chance to meet Jack Douglas, the guy that discovered Aerosmith, the multi-million disc seller with John Lennon, Slash, Cheap Trick, Michael Monroe… This was the first time the band recorded an album in a real studio. so Jack proposed the name of “It Begins” to name this third album.

After “It Begins” tour, the band felt a bit stuck in their country. They wanted to come back to international gigs as they did when they begun but with a stronger experience. To be able to reach this point BlackRain decided to record a new album that show how “released” they wanted to be. Recorded between the suburb of Paris and Los Angeles, California during the early part of 2015, this new Long Play is the result of many months of collaboration between BlackRain and Jack who, prior to recording, spent a lot of his time listening and analyzing tons of demos in order to select the best songs and create for each of them the best arrangement … He really applied his magic touch to the whole process. And to complete the circle it’s Warren Huart, Aerosmith’s sound engineer who, along with Jack, mixed these new BlackRain songs at the Spitfire Studio in Laurel Canyon. Hopefully, the band found UDR, an independent and international label to promote them abroad.

They were ready to hit the stage harder than ever everywhere in this fucking world that need Rock’n’Roll more than ever.

BlackRain‘s “Rock Your City” video (from the album Licence To Thrill):