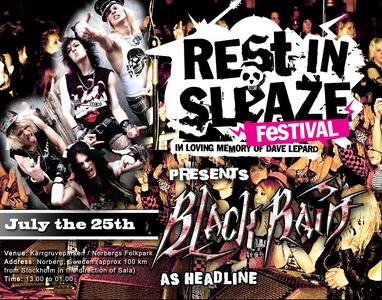 Blackrain will headline the 2009 edition of the Rest In Sleaze Festival on July 25th in Norberg, Sweden. Rest In Sleaze is a festival dedicated to former Crashdiet vocalist Dave Lepard. Tickets can be purchased at www.rest-in-sleaze.com.

Blackrain was chosen by Mrs. Hellman, the mother of singer Dave Lepard who was a founding member of Crashdiet and passed away three years ago. The festival was created at the time in memory of Dave Lepard.

Blackrain is also releasing a Japanese edition of their new CD “License To Thrill”. The CD will be in stores on July 22nd through Spiritual Beast and will contain a new cover, booklet, and cover song of The Sisters of Mercy’s “No Time To Cry” as bonus.