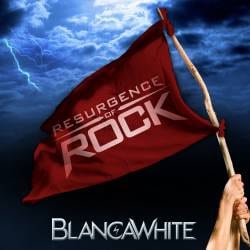 BlancaWhite have teamed up with Sleaze Roxx to deliver the title track from the band’s new album ‘Resurgence Of Rock’, sung by King Kobra and Rough Cutt vocalist Paul Shortino.

Billed as a “hard rock grass roots revolution,” ‘Resurgence Of Rock’ is the brainchild of international lawyer Ken Savage and brothers Austin and Rick Schell, who spared no effort or expense to bring their hard rock dreams to fruition. “We’re just ordinary rock fans who want the world to return to the glory days of hard rock, and we cared enough to do something about it,” says Savage, a fifth-generation Texan based in Paris, France. “This is hard rock made by fans for fans, pure and simple. It was a thrill and an honor to make this album, and we hope every hard rock fan from the 70s and 80s will enjoy it.”

‘Resurgence Of Rock’ is unique in the manner it mixes hard rock sounds of the 70s and 80s with a modern-day perspective. “The driving rock sounds on this album are straight out of the classic hard rock era. But the subject matter and lyrics are from the perspective of today,” notes Savage. “The songs ought to appeal to anyone who grew up in the late 70s or 80s. The songs either look back on that era with fondness, or they address issues that someone who grew up in that period, now with a few more years under his or her belt, faces today.” In short, ‘Resurgence Of Rock’ is a unique mix of the vintage, classic sounds of bands like AC/DC or Van Halen, with the perspective of today,” explains Savage.

BlancaWhite adopted the models of the Alan Parsons Project and early Queens of the Stone Age and scoured the world to locate the best vocalists for each of their songs. “This project was an extraordinary odyssey that took us to Los Angeles, Las Vegas, Austin, Nashville, and Paris. The logistics and challenges were horrific,” says Savage. “We wanted the very best in terms of singers, as well as mixing and mastering, and we did whatever was required to make that happen. It was challenging and exhilarating at the same time!”

BlancaWhite is named after the world-famous bar in Matamoros, Mexico, just across from the Texas border where Savage and the Schells grew up. The international influences on the album are unmistakable. BlancaWhite’s founders are particularly proud of the fact that one of their key hard rockers, “Your Boyfriend Is Lame,” contains lines in Spanish and French, and that they were able to locate Terry Ilous, perhaps the only natively tri-lingual hard rock vocalist of the 80s, to sing that song.

Little surprise that Sammy Hagar, Van Halen, and AC/DC were major influences on the album. “We were most strongly influenced by Sammy, Eddie, Malcolm, and Angus, with some combination of Def Leppard and Judas Priest as well,” says Savage. “There are strong Mexico and partying themes to this album, and even a reference to Van Halen’s Cabo Wabo in our title song. Sammy ought to be proud of what he’s inspired!”

BlancaWhite is already working on its next album. BlancaWhite intends to keep making “hard rock music with a modern twist” as well as matching exceptional singers to particular songs. “We hope everyone gets a real kick out of Resurgence of Rock. It’s time for rock music to become fun again, without any higher calling. And hold on to your hats — there is much more to come!,” says Savage.