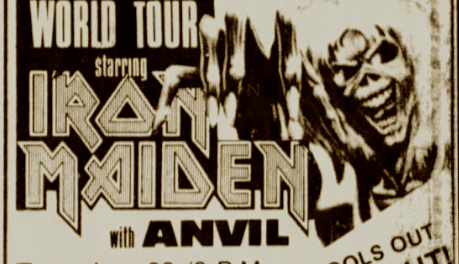 Iron Maiden playing to only 2,000 people? It’s hard to fathom this happening at this stage in the band’s career but back in 1982 when the group was touring behind their Number of the Beast album, that is the amount of people that went to see the band headline (with Anvil as the opener) the Ottawa Civic Centre in Ottawa, Ontario, Canada on June 22, 1982. 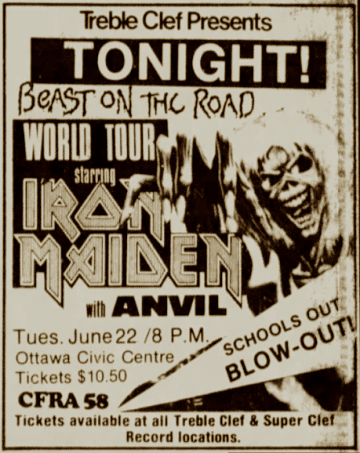 The only number that mattered to Iron Maiden fans in Ottawa in 1982 was 6/22 – the date that the Beast on the Road Tour hit the capitol.

June 22, 1982 would mark Iron Maiden‘s Ottawa debut. For those who’d gone to see them in Montreal the previous year, this would still be a new experience: there was an amazing, brand-new album of songs to hear performed live with a killer new vocalist – Bruce Dickinson.

‘Number of the Beast’ was released in North America in March 1982, and launched a 120-date tour. Their Canadian leg of the tour was to begin in Ottawa. The band would be well-rested in Ottawa; they had two days off following their previous gig in Oklahoma.

Sometime before their concert at the Civic Centre, Iron Maiden was scheduled to do a meet and greet at a SuperClef record store in Ottawa. Jack Killen was an employee there at the time. He remembers the band arriving late and being overwhelmed by the number of fans who were waiting for them. Amongst the fans were members of Witchkiller, who took these photos of the SuperClef record signing; you can see a few more snapshots here: https://bit.ly/2TEx3xl

“At the end of it all we closed the store and the members of the band got a shopping spree … any tunes they wanted,” wrote Jack Killen in a comment on the Witchkiller page. “They ended up taking mostly cassettes … I got to hang with Bruce as he picked stuff out … Humble Pie, Deep Purple and Journey … He thought Steve Perry was amazing.” Later, after the concert, Jack helped to get members of Witchkiller backstage. 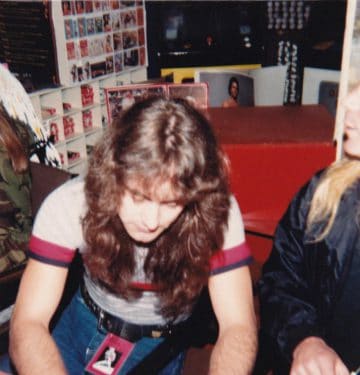 The Civic Centre show was to be opened by Toronto’s Anvil. ‘Metal on Metal’ has just been released two months earlier. Anvil had already established itself well in Ottawa-Hull. During the previous summer (1981) the band had played six dates at Le Papillon and the British Hotel. And, just four weeks before this Maiden gig, they’d headlined a show at Barrymore’s.

Anvil had been invited to open all five of Iron Maiden’s Canadian dates. Anvil frontman Lips recalls standing in the large, empty Ottawa concert arena before the show and gazing at the thousands of seats: “a pretty nerve-racking experience.” Suddenly, Steve Harris appeared. Steve seemed amazed to point out to Lips that Anvil’s new album had a song called “666” while Maiden’s new album was called ‘Number of the Beast’. (it was still just 1982 after all; plenty of Satan references in Metal to come).

Over 2,000 fans marched into the Civic Centre that Tuesday evening. Anvil’s opening set was well-received, ending with the track “Bondage,” during which Lips did his infamous dildo-guitar-playing routine.

Iron Maiden took to the stage next, opening with “Murders in the Rue Morgue” and “Wrathchild” before belting out four songs in a row from ‘Beast.’ Near the end of the set, a ten-foot tall Eddie, in a leather jacket, appeared on stage. The band returned for an encore of Di’Anno-era songs.

This show was drummer Clive Burr’s only gig in Ottawa. By the end of 1982, he would be fired from Iron Maiden. When the band returned to Ottawa in 1984, Nicko McBrain was the man behind the kit. – RC“