Former Iron Maiden lead vocalist Blaze Bayley was recently interviewed by Metal Mike on the 80’s Glam Metalcast podcast. Th singer was promoting his new studio album War Within Me, which was released back on April 9, 2021. 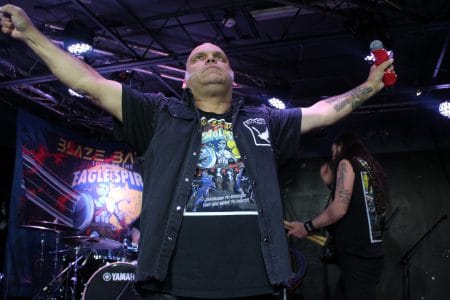 On auditioning for Iron Maiden, Bayley recalled (as transcribed by the 80’s Glam Metalcast podcast with slight edits): “They held a lot of auditions and had a lot of tapes, and they already had my CDs. I asked for an audition and I got it. I really thought they’d be going for someone that sounded like Bruce [Dickinson]. Bruce Dickinson is a very influential metal singer, and there’s a lot of singers that sounded similar to him because of that influence. I don’t know why, but I think they chose me because I was different. I was shocked, because I didn’t think I would get it. It was an audition of ten songs that were almost always in the setlist. Songs like “Fear of The Dark”, “The Trooper”, and “Hallowed By Thy Name”. I thought for an hour, I am the singer of Iron Maiden, and no one can take that away from me. That’s how I approached it, there was nothing more I could do. There’s no more preparation. If I mess up, it’s over. I knew all the parts because I was a huge fan. I felt I did ok. Then there was a second audition where they record your voice to see how you are going to be in the studio, which is very smart. I asked Steve Harris if I could get a tape of me singing with the backing track of the band. He said “If you don’t get in, we’ll send you a tape of the bloke who did” which I thought was very harsh! A few weeks later, I got a phone call that I was in. It was like a roller coster ride after that, so intense!”

On how his era in the band is looked at and his thoughts on Iron Maiden today, Bayley indicated: “It’s the girlfriend situation. It’s where your favorite singer leaves your favorite band… It’s heartbreaking! It’s like you break up with your girlfriend and you see her with a guy who’s taller, slimmer, and has better hair than you the next week. I understand how fans would feel. A lot of fans from that era absolutely hate me, and that won’t change. Some fans listen to The X Factor and say Bruce sounds so different on this one! If their lucky, they find out it’s a completely different singer and they go down the Blaze Bayley rabbit hole!

Maiden still plays some songs from my era because they are a real band, that makes real music. We were all 100% committed at the time. To not acknowledge that era of change is to say “It wasn’t our choice”, “We didn’t really like it”, and “We didn’t give it 100%”. Maiden put those songs in their set and do songs from every album (including the first two with Paul Di’Anno and my two) because everything is done with heart. Everything is done with passion. You would never hear them say “we just did those albums for the money”. That’s not Iron Maiden. Iron Maiden is passion and it’s all about the music. They don’t compromise and they don’t give in to anybody’s idea of what Maiden should or shouldn’t be…. and that’s why we love them! I am so lucky. I’ve been at the very top of my profession in what I consider to be the greatest heavy metal band of all time. They are really one of the greatest bands in the history of music, right there along side Led Zeppelin and The Who.”

Iron Maiden‘s “The Angel And The Gambler” video (from Virtual XI album):

You can listen to the interview with Blaze Bayley on the 80’s Glam Metalcast podcast below: