Former Iron Maiden lead vocalist Blaze Bayley has released a video for his song “Eating Lies” from his latest studio album Endure and Survive, which was released back in March 2017. 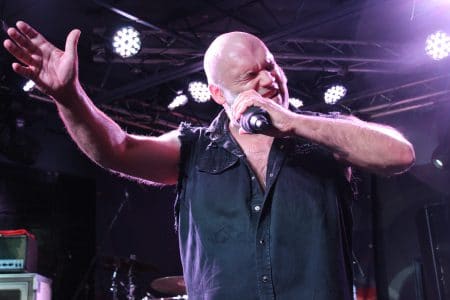 Sleaze Roxx recently caught Bayley in concert in Toronto, Ontario, Canada and stated as follows in its concert review: ‘As I was leaving The Rockpile, I thought that I had seen the best concert of the year to date and that’s even though I only knew a little over half of the songs from Bayley‘s setlist going into the concert. It was definitely better than the Iron Maiden concert that I had recently seen at the Budweiser Stage or the Metallica concert that I had seen at the Rogers Centre. I’ll take a great performance in a small bar setting with 100 or so people any day over seeing a concert from one of the bigger bands with over 10,000 screaming fans (or in the case of Metallica, about 50,000 fans). As I started to write this review however, I remembered the fantastic Dirkschneider concert that I had seen at the start of the year in early January. Given that I was way more familiar with Dirkschneider‘s Accept material than Bayley’s solo material, I’m going to give the best concert of this year so far to Dirkschneider but Bayley is at #2.’