Blotzer fires back to DeMartini and explains his position

The Ratt name saga continues between drummer Bobby Blotzer and everyone else concerned.

Three days after Sleaze Roxx reported that Ratt name co-owner / lead guitarist Warren DeMartini spoke to Blabbermouth stating how he was against Blotzer using the Ratt name the way he was, Blotzer spoke to Eddie Trunk during an appearance on the September 28th edition of Eddie Trunk‘s SiriusXM satellite radio show “Eddie Trunk Live” during which Blotzer addressed a number of issues and which was reported by Blabbermouth: 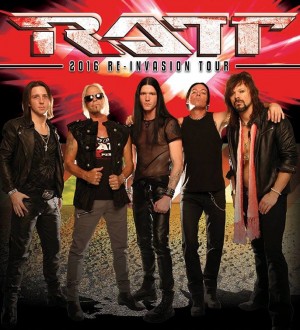 With respect to touring under the Ratt name, Blotzer stated: “I wanna tour. Me and Warren own 50/50 of the name. He does not wanna tour. The other guys aren’t gonna tour. So it leaves me sitting here… the one guy who never quit out of the whole band and who’s always been pushing the other guys to get back together. ’97 continued in 2000 when Stephen quit again, etc. [I’m the one who who] keep[s] things motivating. That’s me all the time and maybe not always in the best way. But my 50/50 partner doesn’t wanna tour as a member. He becomes a non-touring member and that leaves me open to go out and bring the songs that people wanna hear on the road… If you have a company that you’ve been with for 34 years, and you and one other person own that company, and one guy doesn’t wanna work and you do, what’s… You know what I mean? If I wanted to stay home and Warren wanted to go out, I’d be like ‘Okay. Just have the check here by Friday.’ because I will get dividends, and he will get dividends… I wanna work. I wanna play our tunes. I’ve done a lot of outside projects. I get it. It’s fun. But my body of music that I’m associated with and most accepted with is Ratt.”

In regard to how good his own “Ratt” band is, Blotzer stated: “My band is so damn good. I’m telling you right now! The singer [is] amazing — Josh [Alan of Sin City Sinners]. He’s better than Pearcy was in his heyday… I’ll tell you what. If [people] were blind and they were at one of our gigs, it would be Ratt [that they would be hearing] because people wanna hear the music. Bottom line, this band brings integrity to Ratt music. They play great. They perform great. There’s no arguing. Oh my God! That is so amazing to be a part of a band that doesn’t argue. And God bless my ex-bandmates but it was pretty intense trying to get rehearsals done and that kind of stuff.” 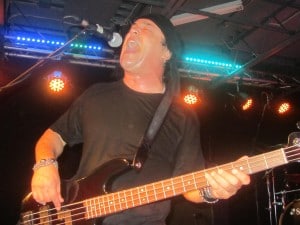 With respect to how good an “original” Ratt member can sound like with outside band members playing the Ratt hits, Sleaze Roxx recently attended the third show from Ratt’s Juan Croucier in Toronto and stated: “[Juan] Croucier had advertised ahead of time that he and his bandmates, drummer Pete Holmes of Black ‘N Blue fame, and guitarists Toni Aleman and Mike Moore, had worked very hard to sound as good as they possibly could. Well, that was certainly the case. The entire band sounded so tight and in particular, Aleman had that guitar God quality to him. It was simply so much fun to see him play and move his fingers from up close. Aleman and Moore are definitely two very talented guitarists and also provided very strong background vocals throughout the entire show. The contrast in style between Moore and Aleman was also fun to watch as Moore was just an angry monster out there with his long hair covering his face for at least half the show while Aleman was all smiles, had that smooth DeMartini quality and provided an abundance of rock star poses throughout the evening. While Croucier‘s bandmates were all very good, the star of the evening was Croucier who really impressed me with his intricate bass playing while handling the lead vocals.”

Ratt’s Juan Croucier, Back For More

Blotzer addressed the looming threat from DeMartini to block his version of Ratt as he stated: “I can’t really talk a lot about the specifics, because he’s now [saying that he will try to stop me from using the Ratt name]… which is amazing to me. He’s really the one who prevented [the band from] being together right now, by and large because in owning this name and this stock that he and I own 50/50, the other guys wanted 25 percent. I’m like ‘I don’t care. Whatever it takes!’ Safety nets below. Everybody has safety and job stability and we all tour every year like a normal job — normal people. He wouldn’t give it up. So he’s not willing to tour and he’s not willing to give up the stock in the name so he puts us in a position where — I don’t know. He’s up in candyland in the hills here.”

Blotzer added: “I saw that thing that he put out on Blabbermouth, or wherever it came from. Somebody sent it to me. Like [Warren stated] ‘I’m against this and [I] called to ask me [him] if he could do this. And I said, ‘Be Bob’s Cellar.’ It’s like ‘I didn’t call you to ask you anything. I called to ask him if he saw the video.’ I’ve asked him a hundred times in the last five years when the guys didn’t wanna play. ‘Do you wanna get a band together?’ We had a very famous singer that wanted to join this band, and he wouldn’t even have a part of it or talk about it. He’s like, ‘If it’s the original band, I’m in.’ Even though he knows Stephen‘s condition in the last few tours wasn’t very productive to put it lightly. So why aren’t you ready to switch gears and go? We did it for seven and a half years without the original guys, just him and I. So whatever his reasons are, I don’t know. But him stopping me is a direct aggressive move to stop me from earning a living with my company. That’s also his company too but if he chooses to sit it out, that’s his choice. But I’m bringing it to the fans. When people come to the gig, they are so excited. They love it. They have a great time.”

With respect to why DeMartini is not interested in touring with Ratt, Blotzer speculated that: “My guess is him and I both have pretty substantial hearing loss from so many years of doing this. I think that maybe his ears are bugging him a bit, and he’s just not saying anything. That’s just a guess, obviously. But I wanna take it out, and I have the right, by law, to do it… [His] reasoning for not wanting to tour Ratt was not giving the name in case Stephen took the name and toured as Ratt and then we’d be back in court. So I’m saying to him on the phone — I’m like ‘So he’s not coming back and you would rather me not do that and are threatening to sue me — who you’ll make money from if I go out and you don’t go.’ That makes a lot of sense. To who? Not me!… Let’s just say, if you were to talk to anybody else in the band — or that’s worked for the band or in the band — any of the members, not just the originals, there’s a lot of issues with control that came from his area of the world… He wants to control this until his dying days. Why would he not want me to go out? We make great money residually. Everybody can stay home and not work. I mean, that’s not a problem. I wanna get the fuck out of the house. I played enough golf. Mind you, five years we’ve been off. You can’t do that legally. It’s against corporate law in California. I don’t know what everybody does outside this state but you cannot be an officer an a shareholder and not work your company. It’s called breach of fiduciary duty — that I know! And I’m surprised he’s not knowing that.”

In regard to the original Ratt members getting back together, Blotzer stated: “I’m gonna say something right here that I’ve never said — ever. I don’t ever see Ratt getting back together. There is just right now — at this point — four corners and no one’s leaving that corner. I’m leaving it because the guy that chose not to go — the other member. There’s two members of Ratt — me and Warren — and Warren doesn’t wanna tour. Legally, that left me allowed to go put a band together… He makes money. When the bills are all paid and the dust clears — ‘Here’s your check bud.'”

Blotzer also addressed other issues plaguing the Ratt brand: “Here’s another part of this spin that’s driving me sleepless at times but that’s another neck that’s gonna be hanging. Because we’ve got Juan [Croucier] infringing on the trademark [by using the Ratt logo]. We have our ex-manager withholding my property and Warren‘s property, which are the codes to the web sites, the Twitter accounts, the Facebook, etc. Which are all [followed by] like, six, seven hundred thousand people. I don’t know. I don’t really generally pay attention. That’s why I don’t have the codes beause I don’t generally care. And he’s withholding that.”