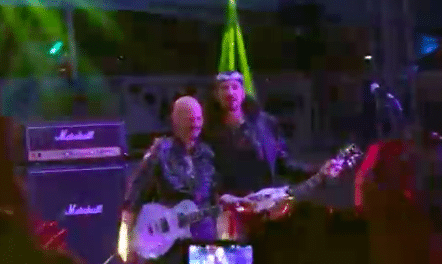 Guitarist Bob Kulick was recently interviewed by Jimmy Kay for Canada’s The Metal Voice and spoke about his rift with his brother and former KISS guitarist Bruce Kulick. About two years ago in November 2017, Bob and Bruce Kulick played together live at the KISS Kruise VII along with lead vocalist / bassist Todd Kerns and drummer Brent Fitz with a set comprised of rarely played KISS classics. Since then, Bruce Kulick has performed live at the KISS Kruise‘s next two yearly editions but without his older brother Bob. 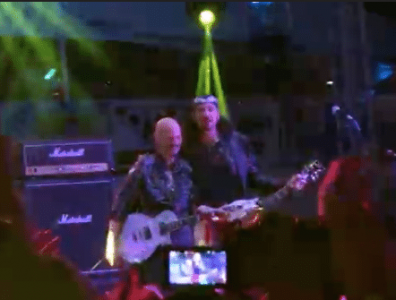 Bob Kulick commented to The Metal Voice about the Kulick brothers’ live performance two years ago at the KISS Kruise VII as he stated (with slight edits):

“In an effort to mend the fences, bury the hatchet, whatever you want to call it, from a bad and ugly situation that Bruce precipitated last year by disrespecting me and taking my name off of a contract that was offered to us for the Kiss cruise of last year. After a successful Kiss cruise the year before, my brother was totally intimidated by the fact that as I said to him finally, ‘Bruce, it’s taken all this time. We finally found our band. Here’s the band to conquer the world with.’ The band that I put together — Brent Fitz and Todd Kerns. My brother was shaking in his shoes when I said to him, ‘We’re gonna have to ask Paul and Gene to pay for other people to come and play with us.’ Yeah, I said ‘Because we deserve to have our own band. We’re stars. You’re a star Bruce. Act like it.’ But he has no balls at all so I had to go and set that up, so that Paul and Gene would have to pay two other performers to come and be our band.

Then we were listed as Kiss Konfidential down there with the people who were on the panel. Nothing wrong with that. We did do a panel but we also played. Nobody knew what we were gonna play. They didn’t even have us listed as performers. They mentioned the other performers but not us. How insulting. The Kulick brothers, no rehearsal, no sound check, the guinea pigs, the first band to play on the cruise with electric instruments. Kiss only played acoustically. Big difference. So there’s everybody crowded in the whole ship, like the Titanic, it was kind of tipping over from everybody standing there. What did we do? We mopped the floor with Kiss. Mopped the floor with them playing their own songs. Totally kicked ass. I looked to my brother and said, ‘This is magic.’ I then got tours booked for this band, offers. I had record deals ready to go even if it was only to play the songs we played on the cruise. Bruce turned all of it all down. Costing me work and wasting my time.”

Some of the comments left at the end of Sleaze Roxx‘s article titled Bob and Bruce Kulick team up to deliver rarely played KISS classics at KISS Kruise VII back on November 5, 2017 seem to back up Bob Kulick‘s assessment of the Kulick brothers’ performance:

“The Kulick brothers were AMAZING!!! Hopefully they WILL be onboard next year for the KKVIII. Thanks sooo much for ROCKING us ALL Bob, Bruce, Todd & Brent! ❤️?✌???”

“Awesome show from top to bottom. Bob and Bruce raised the bar, challenging Gene and Paul to step up their game and they absolutely rose to the challenge, with Tomorrow and Tonight, Is That You, Hot and Cold, Sweet Pain, Cold Gin, She and most importantly, “I””

“They need to take this on the road. I would absolutely pay to see this.”

Bob Kulick Dead R.I.P. May 29 2020One of Bob Kulick’s last interviewsFor a quote for The Metal Voice T-shirt please fill out form herehttps://www.themetalvo…