Ten days after Sleaze Roxx announced that it strongly appeared that the Bobby Blotzer’s Ratt Experience would be going under the Ratt moniker going forward, it is now officially confirmed that Bobby Blotzer has taken over the Ratt name.

A press release (with slight edits) released about an hour ago states:

From the band that brought some of the most well known rock anthems of the past 35 years and helped popularize the MTV music generation… Ratt is “back for more” and will be performing shows from October- December 2015 and kicking off the North American leg of Ratt‘s “Re-Invasion Tour” in 2016. 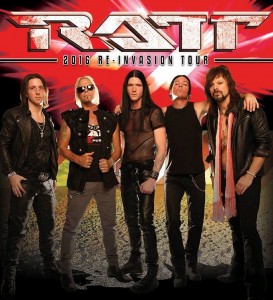 After a five year battle over trademark issues… doing everything he could to appease and re-assemble the band, Bobby Blotzer, the CEO of WBS, Inc. has taken control of the Ratt brand and is taking his multi-platinum Ratt back on the road, bringing fans the songs they love and shows they’ve missed… continuing to build upon Ratt‘s legendary legacy! Ratt-n-roll forever!

Current tour dates are scheduled with major swings through the Mid-West, Southeast, South, Northeast and Canada. Stay tuned for more cities and dates being added each day.

Check your local venues and promoters or contact ARM Entertainment for booking and tour date information.

Ratt‘s press release is about one day prior to Ratt’s Juan Croucier is about to start his first tour as “the other voice of Ratt” playing all of the Ratt hits.