It’s been more than a year and a half since we heard from former Ratt drummer Bobby Blotzer who was leading his own version of Ratt from 2015 to 2018 until he was apparently stopped by singer Stephen Pearcy, guitarist Warren DeMartini and bassist Juan Croucier by way of litigation. 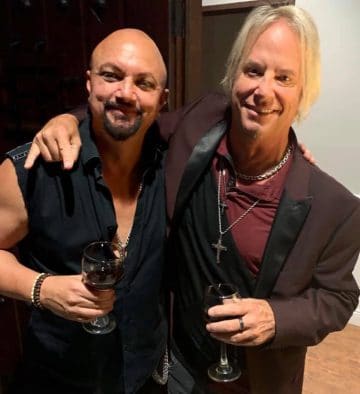 Ex-Queensrÿche frontman Geoff Tate recently posted a photo of himself and Blotzer backstage before the former’s concert with Operation: Mindcrime at The Canyon in Santa Clarita, California, USA yesterday (on September 27, 2019) on his Facebook account with the following caption:

“Hello to an old friend, Bobby Blotzer, backstage before the show.”

Back on March 28, 2018, Blotzer had advised that he would do one last interview before the litigation ended to set the record straight on “Camp Chaos”, also known as Ratt.

The interview in question turned out to be with Mitch Lafon for the Rock Talk with Mitch Lafon podcast on March 29, 2018 during which Blotzer stated (as transcribed by Sleaze Roxx): “I am semi-retired you know. I have a great life. The thing is Ratt makes lots and lots of royalty money and I am not worried that I have to join something cooky like L.A. Guns and travel in a van across the country. So you know, I don’t want to do anything except play with Ratt unless I can join a Beatles tribute band or something [laughs] in all honesty. But you know, I would like to finish the game with Ratt would be ultimately nice. God knows that could probably never happen but I would hope that someday that would be a possibility. We’re in a fight. We’re in a boxing ring. When the fight’s over, the smoke clears you know win, lose or draw, I am up for playing and finishing it off for the fans and for myself you know. I have to live with this cloud in my head and I don’t like it.”