A new Court decision has been made publicly available involving Bobby Blotzer‘s company WBS, Inc. (as “Plaintiff”) and Ratt frontman Stephen Pearcy (as one of the “Defendants”).

On February 10th, District Judge Dean D. Pregerson of the United States District Court, C.D. California rejected WBS, Inc.‘s (Blotzer) motion to obtain a temporary restraining order against Pearcy based on the allegation that the latter intended to perform with a band called Ratt in Minnesota on February 11, 2017. 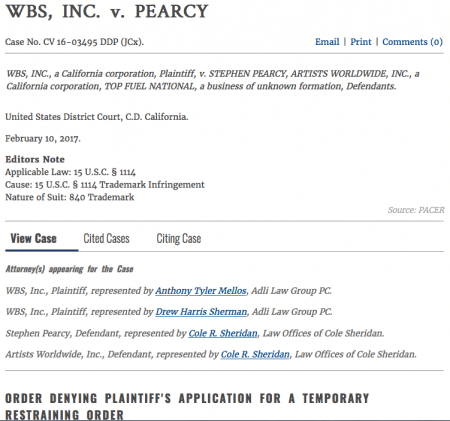 To succeed with its motion, WBS, Inc. (i.e. Blotzer) had to establish two things: (1) it had “a protectible ownership interest in the mark; and (2) that the defendants’ use of the mark was likely to cause consumer confusion.

WBS, Inc. (Blotzer) argued that it was likely to succeed on the merits of its trademark infringement claim because the defendants (Pearcy and others) are subject to collateral estoppel. The judge indicated that a party may be collaterally estopped where “(1) the issue necessarily decided at the previous proceeding is identical to the one which is sought to be relitigated; (2) the first proceeding ended with a final judgment on the merits; and (3) the party against whom collateral estoppel is asserted was a party or in privity with a party at the first proceeding.”

District Judge Pregerson essentially rejected WBS, Inc.‘s (“Blotzer“) “collateral estoppel” argument given that it was unsupported with any evidence. The judge also found that WBS, Inc.‘s (i.e. Blotzer) alternative argument regarding likelihood of success on the merits was not well developed.

Finally, the judge noted that “…there appears to be a dispute whether Pearcy has obtained a license to use the marks.” Pearcy‘s declaration states that he has received permission from both the RATT General Partnership and WBS to utilize the marks…” It was noted that WBS, Inc. objected to Pearcy‘s declaration on the ground that the latter lacked personal knowledge. Although the judge agreed that there was some merit in WBS, Inc.‘s argument, he concluded:

As we know, Ratt did end up playing at the Treasure Island Resort & Casino in Welch, Minnesota, USA on February 11, 2017. Sleaze Roxx stated in its concert review: “[Jimmy] DeGrasso seemed to be fitting in nicely and didn’t skip a beat while keeping up with the rest of the band on the quick paced song “Body Talk.” It was great seeing the duo guitars of [Warren] DeMartini and [Carlos] Cavazo work their magic, but I could tell Cavazo was “ad libbing” the solos he played, which bothered me just a little bit. I was expecting to hear one thing and he would play something else, but that wasn’t going to ruin the evening for me. The band ended the night with “Back For More” and instead of leaving the stage to only come back out for an encore, Pearcy introduced the band, thanked the fans for a great evening and Ratt finished out the night with their biggest hit “Round And Round” before leaving the stage.”