There’s nothing like coming close to dying to make you appreciate life on earth that much more. Former Vinnie Vincent Invasion and current Lita Ford drummer Bobby Rock took to Facebook to recount when he along with five of his touring mates were involved in a car crash 22 years ago on February 27, 1997.

The following message was posted on Rock‘s Facebook page yesterday: 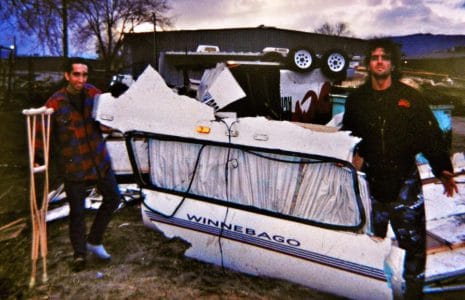 “On this day, February 27 – twenty-two years ago – I almost died… along with my five other tour mates. Well, it probably wasn’t quite that dramatic, although the Texas Highway Patrol might disagree. An officer who arrived on the scene at 1:30 AM—once the six of us had been carted off to two separate trauma centers near El Paso—asked a few bystanders one question, as he surveyed the wreckage: “Were there ANY survivors?”

It was 1997, and we were driving from LA to Atlanta to kick off what would eventually be a 140-city tour of drum clinics and club dates around North America. Guitarist Neil Zaza (pictured here) was on board the brand new Winnebago I had just purchased four days prior, along with my long-time drum tech, Cubby, two other crew personnel, and an old friend who had volunteered to help us make the cross-country trek if we could drop him off in Houston. No problem… until he fell asleep at the wheel, jackknifed the trailer into a guardrail, and sent the RV rolling end-over-end four times across the West Texas desert. Not fun.

I was thrown some 30 feet from the rig—catapulted, really—as everyone else, and all of our belongings, were scattered along the side of the I-10. It was totally surreal, waking up with all of that violent jolting and jarring, before soaring through the air like fucking Superman… for a hot second, at least. Next thing we knew, people were pulling over to help, and then a helicopter and an ambulance showed up around the same time to take all of our sorry asses to the emergency ward. Zaza and I were “fortunate” enough to wind up at a military facility, where one of the first orders of business was having a male nurse grab my johnson and say, “Sorry, dude,” before inserting a fucking catheter in me. Yoooooow! That was the worst part of the whole experience, and I’m sure Zaza would agree, as he wasn’t spared from this “precautionary” measure, either.

Anyway, we all got lucky. We all made it through. And most of us—including bassist Bill “The Buddha” Dickens who missed out on the festivities—would crank ‘er back up again about 10 weeks (and yet another brand new RV) later and have a hell of a tour. But the biggest gift of averting death is your renewed appreciation for life. Breathe in—Breathe out: Life is sweet… albeit never guaranteed from one moment to the next.”