Bomber Alley release lyric video for single “We Get By”

California, USA based rockers Bomber Alley, which are spearheaded by drummer Talon Blaque, have released a lyric video for their single “We Get By.” 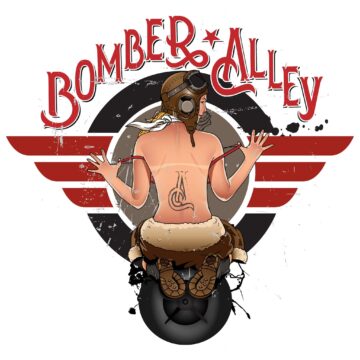 Bomber Alley‘s website indicates (with slight edits): “Bomber Alley, the new godfathers of modern sleaze, have released a brand new single “We Get By” via Mindsnap Music (on behalf of Von Artists Ltd.). The single features two members of Dee Snider of Twisted Sister‘s solo band on guitar (Nick Petrino) and bass (Russel Pzutto), along with Joetown on vocals & more!

Bomber Alley, reminiscing the early Gn’R era sound & attitude, is led by long-time LA sleaze rocker and well known drum tech, Talon Blaque, who stated, “I’m super stoked on the music we are writing & creating & also excited of what the future holds for Bomber Alley. Working with Opus of Dead By Wednesday‘s new label venture Mindsnap Music, which is distributed by Von Artist/The Orchard/Sony, finally feels like we have a solid home for our awesome music that will actually get out there. They will take the time to nurture us & understand music unlike many other hit & run labels out there only looking for a quick buck. Tons of cool things to come including some tour dates TBA as well so please stay tuned!!”

Stay tuned for a follow up Bomber Alley tune and EP in early 2022 coming out on Mindsnap Music via Von Artist/The Orchard/SONY!”

Bomber Alley‘s “We Get By” lyric video: