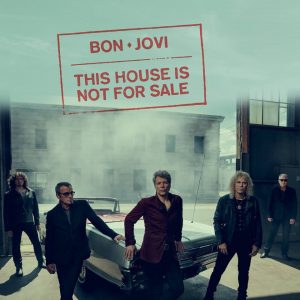 Bon Jovi will be releasing a new single along with a video on August 12, 2016.

This House Is Not For Sale is Bon Jovi‘s fourteenth studio album and will be released in the fall of 2016.

“This House Is Not For Sale, the band’s highly-anticipated album slated for release in March next year, is “really going back to the beginning”, ringleader Jon Bon Jovi reveals in a press conference in Kuala Lumpur last week.

“This record is about our integrity. Integrity matters and we’re at a stage of our career where we don’t have anything left to prove.

“Some songs have a little more of the ‘chip on my shoulder’ sound which is OK for us to have right now.”

The band, Jon explains, had grown accustomed to recording their parts separately. That changed with the upcoming album.

“We were recording at different times and different rooms in the studio. That’s not happening anymore. We went back to the place where we cut Runaway in 1982 – where I used to sweep the floor and fetch coffee. And, we did This House Is Not For Sale.”

You can read the entire article at star2.com.

Sleaze Roxx stated the following in its review of Bon Jovi‘s last album Burning Bridges: “Anyway, as you may reckon by now, the album is more of the same of what we’ve been getting lately from Bon Jovi. So if you’ve heard The Circle or What About Now, you already know what’s in store here, and if you haven’t and are a fan of the old music, stay away at all costs because there’s absolutely nothing here for us hard rock fans, not even real rock fans for that matter… it’s all about pop rock now.”