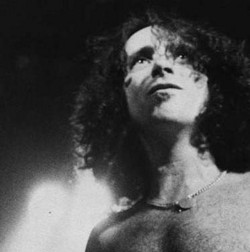 High Voltage Productions, an American production company, has begun pre-production developmentof an upcoming proposed docu-drama entitled, “Bon Scott – The Legend of AC/DC” as of March of thisyear. This announcement comes on the heels of a prior announcement back in 2008 that an Australianproduction company was beginning development of a similar project that has not yet materialized. Thisproject hopes to be the first of its kind.

After the official press release of an upcoming docu-drama film production about late AC/DC vocalist BonScott went viral on the internet internationally last week, it has been learned that the film project organizersare seeking a producer to back the project.

“We have been approached by a number of prospective producers for this project in a fairly short period oftime,” said a source. “But, this is a historic opportunity for a producer to step in and back a project now withinternational credibility.”

Much of the speculation centered around the project is who would handle the starring role portrayingScott. Moreover, who knew enough about the story to write a viable screenplay for the project? Americanmusician/actor, Rob Liotti, took on the task. The singer has portrayed Scott onstage for years and is actually amusician, writer, and actor.

“This is an an extremely unique opportunity for a producer to become involved with a project that willhave built-in, worldwide appeal,” Liotti said. “One thing of integral importance, however, is that it be the rightproducer for the project. This is a movie about a music icon. Therefore, the right producer clearly considersmonetary investment and ROI [Return On Investment] , but the passion needs to be there as well,” the actorwent on to say. “At this point, we are open-minded as to whom that person or company may be, but noagreement has been made to date. The budget for this film is certainly not over-the-top in necessity, but it isan investment nonetheless…”

Asked whether he [Liotti] thought the production investment may come from American or Australianinvestors, he added that “it is difficult to speculate on that… it could come from New Zealand or the U.K. forthat matter… I’m sure there will be a lot of radio interviews coming up, and that will surely enter into thetopical discussion. I also just released a radio single called, “Long Gone” with Suite 16, and another one tofollow, so I am a busy guy right now! It’s pretty overwhelming – in a good way.”

The plot of the docu-drama is said to examine an integral time period within AC/DC’s history as BonScott helped to catapult AC/DC to international stardom, but never really got to enjoy the fruits of hislabour – even sometimes dealing with bouts of extreme loneliness and isolationism – and ultimatelyculminating in his untimely death by misadventure in 1980.

“There are a lot of challenges with a project of this type,” Liotti said. “One of the biggest challenges isauthenticity… This is an American production of an ostensibly Australian-based story. Therefore, dialectis highly important, as well as capturing the true dynamic of the band and its members. Moreover, theAustralians claim ‘ownership’ of the band and Bon Scott, so there are high expectations to be met fromthe outset. But, it is a story that is viable and deserves to be told…” said the writer.

With AC/DC’s 40th anniversary coming up and now annual events paying homage to the late Scott,millions of AC/DC fans worldwide are seething for a film of this type so that they might personallyexplore what has made AC/DC one of the most successful rock bands in history and their late singer anAustralian icon.

Fans can keep up with the project at www.thebonscottmovie.com, also on Facebook at Bon Scott – TheLegend of AC/DC Movie Page, and can follow on Twitter @RobLiotti.