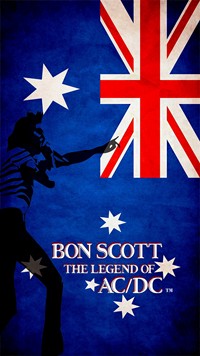 AC/DC fans worldwide seem to be moving one step closer to a film paying hommage to their late Australian rock hero, Bon Scott. In fact, it looks more like a giant leap forward.

Key production team members from High Voltage Productions Pty., the current controlling production company overseeing ‘Bon Scott – The Legend of AC/DC’, are slated to engage in talks this week with one of the world’s leading production and entertainment companies said a source close to the project. The highly-publicised film project is a docudrama chronicling the career of late Aussie frontman, Bon Scott of AC/DC, who died tragically at age 33 in 1980 after only six years with the band.

Starring in the film is American singer/actor Rob Liotti, who is also the credited screenwriter. Liotti is no stranger to things AC/DC as he has performed on stage as Bon Scott for many years, and although this is his first lead feature film role, it has been made apparent that he is a natural for the role. Also on board the High Voltage team is director J. R. Getches who brings a great deal of vision and television experience. The production company also recently announced the addition of producer Michael Meltzer to its team who is no stranger to Hollywood and is well-respected in entertainment circles. Also brought on board was entertainment lawyer, Rhett Klok, who advises on business affairs.

‘Bon Scott — The Legend of AC/DC’, a docu-drama film, is the first of its kind and will chronicle the musical career of the late Australian music icon, Bon Scott, and the band AC/DC. The film concentrates on an integral period of the band’s history when Bon Scott helps to catapult AC/DC to international stardom, yet never really gets to experience fruits of his labour. He even struggles with bouts of loneliness and isolation whilst often reaching out to ordinary fans for companionship and social interaction. Examined and portayed is an accurate depiction of the emotional dynamic surrounding the band based upon true events. The film is sure to leave fans and admirers alike drawn to Scott and his often hysterical antics and to the band which made him famous.