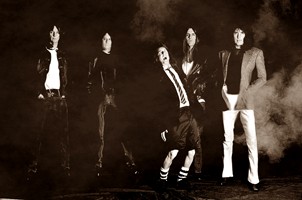 Rock and roll history was made on January 14, 2013 as filmmaker J.R. Getches shot the first ever dramatic portrayal footage of late AC/DC frontman Bon Scott, starring U.S. actor/singer Rob Liotti, in Charleston, South Carolina. This initial scene will serve as a teaser film and prelude to the upcoming trailer now greenlit and in pre-production.

‘Bon Scott – The Legend of AC/DC’, was originally reported upon in August of 2012 and garnered viral worldwide attention. Russell Cotter of High Voltage Productions Pty. and an Australian said, “The Bon Scott movie has got legs! Rob has worked tirelessly to get the movie off the ground and it has traction. More than 30 years after the death of AC/DC’s legendary frontman, Rob has promoted the legacy of Bon Scott, the man, and has been able to pull together the story, the people, and the logistics of what will soon, become a landmark movie. Fans around the world will finally get to see what they have long waited for…”

A confidential meeting was held in mid-November 2012 to solidify commencement of filming and involved key staff as well as key principle role actors. Also noteworthy is the fact that an agreement has been reached with Charleston Sound Studio, LLC. in neighboring Mount Pleasant, South Carolina where the trailer’s theme song will be recorded. Owner and Chief Engineer, Jeff Hodges, has been tasked with capturing the all-important track. The studio has been utilized by stars such as multi-platinum artist Darius Rucker and noted Nashville producer Frank Rogers.

While there has been much speculation over the casting of roles within the project, radio interviews with the film’s star (both in Australia and the United States) have given indication that some preliminary casting has been accomplished for the trailer. It has been learned that besides the principal role Liotti holds as Bon Scott, the roles of Malcolm Young, Angus Young, Mark Evans, Phil Rudd, and Margaret “Silver ” Smith have been cast thus far. In preparation forshooting, the film’s star took on a serious physical regimen, dropping some 40 lbs. in preparation for the role.

Director J.R. Getches added, “The story of Bon Scott is a classical tragedy. He travelled across the world, made his mark, and then died too young. He was a misfit who found his place in rock music and became immortal pursuing his dream. This is a story worth telling.”

To date, the associate production company, High Voltage Productions Pty., is seeking an independent production house and is said to be waiting for the right fit and vision. But they have pledged that the film’s trailer will serve as a vehicle for fundraising and an instrument to give visual perpetuity to the investment interests at-large, as well as the public.