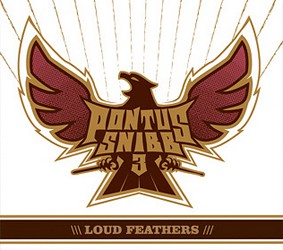 Pontus Snibb has through the years proved that he’s one of Sweden’s best singers and guitarplayers — with a long-lasting, productive career as a recording and live artist with bands such asSNiBB and Bonafide, who are currently getting a lot of attention in Europe. On February 15th, another chapter to the story began with the release of the debut album ‘Loud Feathers’from the newly formed power trio Pontus Snibb 3.

The album was recorded in less than a week, mostly live, in the respected Gig Studio inStockholm, Sweden together with Conny Wall (who has worked with Ane Brun, Electric Boys, PeterBjorn & John, Imperial State Electric to name a few). Many bands talk about capturing that raw,spontaneous energy but instead lock themselves in the studio for six months, spending their timemoving the kick drum a few milliseconds this or that way.

“I thoroughly loved all three days of recording this album”, main man Pontus Snibb says. “Justthree guys having a good time, playing live in the studio with almost no overdubs, the same wayall my favorite albums were made. Just playing groovy music together. We could have called it alive album.”

Pontus Snibb 3 is, on one hand, a brand new band, on the other a continuation of Pontus’previous solo career, and this album is thereby a follow-up of sorts to ‘Admiral Street Recordings’1 and 2 — the latter having also been released by Rootsy back in 2009. Besides Pontus on guitarand vocals, the band features Backdraft’s rhythm section, bass player Mats Rydstrom anddrummer Niklas Matsson (also in Bonafide), who have also recorded and toured with US boogielegends Raging Slab.

‘Loud Feathers’ consists of eleven tracks, with influences from all forms of classic rock, rangingfrom The Who to Free to Crazy Horse to Van Halen. The album also features three prominentguests: guitarist Conny Bloom from Electric Boys, Mats Ronander on harmonica (who played withABBA!) and screams courtesy of Ralf Gyllenhammar from Mustasch.

The band recently did three well attended gigs as the opening act for Dan Baird’s Homemade Sin(with members of the Georgia Satellites and Jason & The Scorchers — which Pontus actually alsodrums for) in Stockholm, Gothenburg and Malmo, about which one reviewer enthused: “For approximately fifty minutes, Pontus Snibb 3 gives us a lesson in classic blues rock that canonly be equaled by a young ZZ Top, minus the hair and beards… They give it their all, fromfirst to last song, rocking and owning the stage with a masterful rhythm!” (CrankitUp)

‘Loud Feathers’ has been released on both CD, limited edition vinyl and digitally with distribution by Warner/ADA.