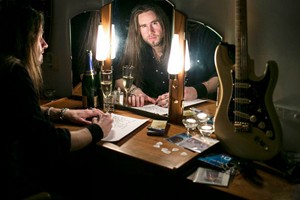 No one can ever say Pontus Snibb is laid back, if hes not bouncing about Europe heading up Bonafide or skin thumping with Jason & The Scorchers, we now see he’s managed to set aside time to write and record a new solo blues rock project aptly named Wreck Of Blues. And what a stunning album it is, with some old school blues ‘n’ swamp rock riffage combined with a very modern rock production and Pontus’s signature voice, this effort has bits of Jeff Beck, Jimi Hendrix and ZZ Top all through it,

Pontus Snibb’s take on it, “Well here it is, another chapter in my musical career, but something I’ve been meaning to lay down for some time now. I’ve been into the whole blues vibe since I was a kid and if I’m honest, it will probably be that sort of riff that will be getting played when I stop doing what I’m doing. When I finally got round to doing this, the tracks were the easy bit as I’ve had most of them in storage for sometime, but as you know, I never stop writing. The musicianship was essential and after doing over 2000 shows with Hakan Nyberg (aka DAD) I couldn’t think of anyone else I’d rather have as part of my rhythm section, he’s taken care of the skins and the low end rumble comes from my bass soulmate, Micke Nilsson. The end result is pleasing as it really represents the passion I have for this genre, but as the great Albert King used to say… Blues Power… can you dig it?”

The album will be released digitally and physically and there will be four special appearances to mark the launch, before Snibb heads out on the European Blues circuit to promote the album.

Next week Bonafide will be releasing a special EP for UK fans and friends that will contain one brand new track and two old ones re-recorded. The EP will only be sold on the road during the group’s March tour of the UK. For the first time in the history of the band frontman Pontus Snibb will not be singing lead vocals on the new song.