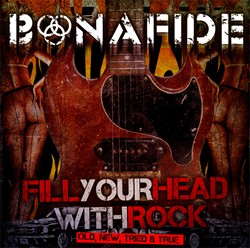 Bonafide’s upcoming EP ‘Fill Your Head With Rock – Old, New, Tried & True’ is now available for pre-order at www.bengans.se. The album, a double A side EP packed with cool original songs, covers, videos and unreleased goodies, will be released on Janurary 28, 2011. Bonafide will celebrate the release of the EP by playing an intimate show at Malmo’s Horn’s Up club on January 29.

Swedish hard rockers Bonafide decided to go for a EP instead of the ordinary radio single format this time around. The reasons were many, but first and foremost it shows a band vitalized by the addition of drummer Niklas Matsson (Raging Slab, Backdraft), and what better way to introduce a new member than to buy some studio time and record a couple of favorite tracks live in the studio!

“Fill Your Head With Rock” and “No Doubt About It” are both taken from Bonafide’s second album ‘Something’s Dripping’, which reached the Sleaze Roxx Top 10 of 2009. The band also gave the opener “Fill Your Head With Rock” a little ‘haircut’, making it more representable for radio. This is a true anthem, and a song that has grown into a live favorite. “No Doubt About It” was picked to be included in the new Atari game ‘Test Drive Unlimited 2’, released for various platforms in early 2011.

The six track EP also includes the song “Kick Me Out”, that for some unknown reason, was not included on the final version of ‘Something’s Dripping’. Bonafide feel this song is a fantastic representation of a band that, for the last two years, has gained an ever growing audience around Europe by extensive touring. Bonafide is really one of the best live acts around today.

“I Don’t Need No Doctor”, “I Can’t Explain” and “Nice Boys (Don’t Play Rock’N’Roll)” see Bonafide paying homage to some rock giants. The Who’s “I Can’t Explain” is another live favorite, often played as an encore. Humble Pie’s “I Don’t Need No Doctor” lets singer and frontman Pontus Snibb show off his golden vocal chords, and “Nice Boys”, which was recorded in one take, is 2 minutes of pure adrenalin.

Also included on the EP are two video’s: “Hard Livin’ Man” and the brand new “No Doubt About It”.