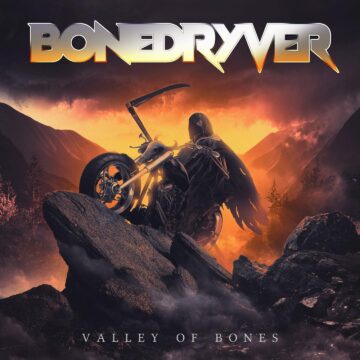 “Seems like it’s taken a while to get to this point, but it’s actually only been an extra year that we needed, what with 2020 kinda being a bust, not to mention losing a drummer and gaining a new one. But here we are, album finished and in the can. Now we go to publishing and release. So many people we’d like to thank who helped with this thing along the way but we’ll start with just who’s in this picture. Our BoneBrothers Steve Young (far left) who produced and played some guitar work on the album, Dennis Brown (far right) who also produced, engineered, mixed and mastered, as well as adding various instruments on the album, as well as our road dog Wes Ahrens (lurking oddly behind our new drummer.)

It’s been a fun, and at times a harrowing experience but after arms were twisted, feeling getting hurt, exciting discoveries and ultimately a kick ass album being born, we’re all so proud of what we forged. So as we prepare the release of “Valley of Bones,” look for the single Rock N Roll Rodeo to be screaming in the next few weeks with a few more singles being released up until the tentative April 29th release date for our sophomore album. We love ya and can’t wait to see ya out there real soon.”