Canadian rockers Boneyard consisting of Pamtera on lead vocals and guitar, Dennis Cooke on bass, Jeff Cunningham on drums and Gary Ursulak on lead guitar have unveiled a video for their track “Evil Ways” from their debut album Oathbreaker, which was recently re-released via WormHoleDeath Records on August 20, 2021. Towards the end of the video, the viewer is given the choice between proceeding with the “original” or an “alternate” ending. 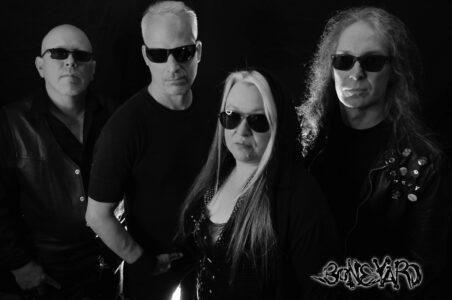 Oathbreaker finished at #7 on the Sleaze Roxx’s top Ten Albums of 2020.

“Launched in 2015, Canadian hard rock/ heavy metal band Boneyard is the lifeblood and passion of vocalist, guitarist and songwriter Pamtera. The members bring a wealth of experience from previous bands that include: Septimus, Nekroskope, Tyrant and Powerslave. The band started out as a cover project, but has been writing original music for the past three years. In May of 2019, the group entered producer/ engineer Cam Macleod‘s [White Wolf] Wolfs Den studio in Edmonton and began recording their debut album. After an extended COVID-19 pause, the band returned to complete the project in August of 2020. Eleven tracks were then sent to be mastered by Maor Appelbaum (Halford, Armored Saint, Anvil, etc.) in Los Angeles, USA. What emerged is the Oathbreaker album, released on October 24, 2020. The first single, Fates Warning, dropped on October 17, 2020. Boneyard signed with Italy’s WormHoleDeath Records on July 15, 2021.”