German hard rockers Bonfire have released their cover of the Survivor classic “Eye of The Tiger” from their new covers album Legends, which was released yesterday via AFM Records. 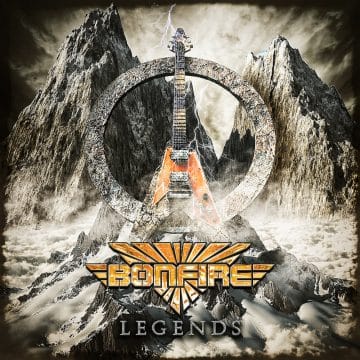 Wikipedia states the following about the song “Eye Of The Tiger” (with slight edits): “Eye of the Tiger” is a song composed by American rock band Survivor. It was released as a single from their third album of the same name Eye of the Tiger and was also the theme song for the film Rocky III, which was released a day before the single. The song was written by Survivor guitarist Frankie Sullivan and keyboardist Jim Peterik, and was recorded at the request of Rocky III star, writer, and director Sylvester Stallone, after Queen denied him permission to use “Another One Bites the Dust”, the song Stallone intended as the Rocky III theme. The version of the song that appears in the movie is the demo version of the song. The movie version also contained tiger growls, something that did not appear on the album version. It features original Survivor singer Dave Bickler on lead vocals.

It gained tremendous MTV and radio airplay and topped charts worldwide during 1982. In the United States, it held No. 1 on the Billboard Hot 100 chart for six consecutive weeks and was the No. 2 single of 1982, behind Olivia Newton-John‘s “Physical”. It spent fifteen consecutive weeks in the top ten, the second longest run of 1982, behind “Hurts So Good” by John Cougar (which was prevented from reaching the top of the Hot 100 by “Eye of the Tiger”). This top ten run is tied with the aforementioned “Another One Bites the Dust” as well as “Physical” as the longest run in the top ten for a number one song during the entire 1980s decade. The band won a 1982 Grammy Award for “Best Rock Performance by Duo or Group With Vocal” at the 25th Annual Grammy Awards. In September 1982, it also peaked at No. 1 in the United Kingdom, remaining at the top of the UK Singles Chart for four consecutive weeks.

The song is also the title song to the 1986 film of the same name.

It was certified platinum in August 1982 by the RIAA, signifying sales of 2 million vinyl copies. The song had sold over 4.1 million in digital downloads in the United States alone by February 2015. It was voted VH1‘s 63rd greatest hard rock song. Combined sales of original vinyl release and digital downloads total over 9 million copies.”

Taken from the album „Legends”, out October 19th, 2018.Pre-order: https://shop.afm-records.de/bonfire/Listen on Spotify: http://sptfy.com/FT6Listen on Apple …

Survivor‘s “Eye Of The Tiger” video:

Watch the official music video for “Eye Of The Tiger” by SurvivorListen to Survivor: https://Survivor.lnk.to/listenYDSubscribe to the official Survivor YouTu…