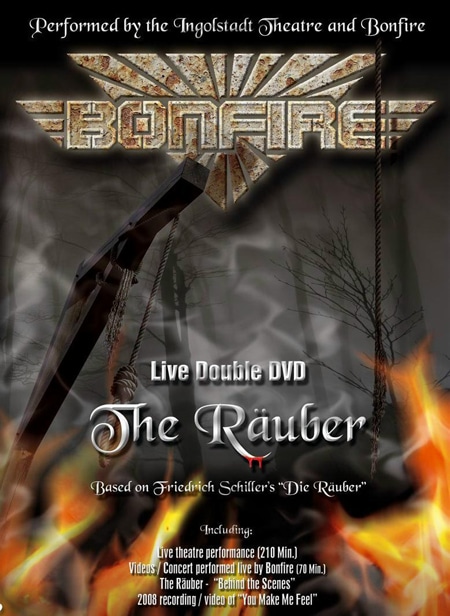 It’s done! After 2 months of hard work on the filming and cutting, the first visual documentary about BONFIRE’s rock opera “The Rauber” is ready for a release on DVD format. The success of this masterpiece made it obvious: all 20 shows at theater were completely sold out and will staged at the theater in Ingolstadt again from December 2008 onwards – this collaboration needs to see the light on DVD!

The result is a double DVD release which includes almost 6 hours of rock music, theater, emotions, passion and acting as well as the tremendous filming skills of British company Transitor Pictures who shot these pictures with seven cameras and one crane.

DVD1 includes BONFIRE alone on stage performing the a 70’s minute long concert – the music without the actors in form of a film and music videos. DVD2 shows the complete Rock Opera with band and the actors of the Theater Ingolstadt.

Additionally to the spectacle, the bonus footage includes a “behind the scenes” documentary, interviews with the band, the cast and the director plus a new recording and a new video clip of the BONFIRE classic “You make me feel” which in August will also appear on the latest edition of the mega selling PlayStation game “Sing Star”.

A trailer for the DVD can be viewed at www.bonfire.de/media/TheRaeuberTrailer.mov