Fortier released his documentary Attack of Life: The Bang Tango Movie via YouTube in January 2016 and ended up being the rhythm guitarist in Bang Tango for a number of years as well. Fortier stated as follows in that regard: 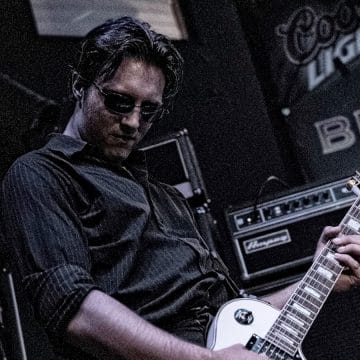 “That movie was how I cut my teeth on literally everything music and film wise. I had absolutely no clue what I was doing at first but was presented this opportunity to take the idea of a Bang Tango documentary and just run with it, which I did for about four years. Through that I learned how to shoot and edit but ended up with about 400 hours of footage which totally gave me a mental breakdown. I collected myself and was able to finish it but unfortunately due to song clearing issues with Universal, it seemed like it would never have an official release until one day I just decided to upload it onto YouTube for free and that’s where it has lived ever since. I will say this though, a friend of mine Anu Gunn was a huge reason why the film finally got finished. He shot a lot of the essential California based interviews for me and did such an incredible job.

I absolutely love every member of the band from the original guys to everyone in between and was honored they let me juggle their legacy a bit with doing this movie. We had one public premiere screening in Chicago and I had the then current line up of Bang Tango there which consisted of original member Joe Leste along with Rowan Robertson, Lance Eric, and Timmy Russell. They were on a midwest tour and were playing in town the following evening. Rowan and I were jamming on some acoustics and the thought got brought up for me to sit in for the whole show with them as a sort of thank you to me for doing the film. I was already familiar with how to play the Bang Tango songs and the band was originally a two guitar player band and were down to one guitarist at that point so it worked out well for the show.

It was such a fun gig and felt like the perfect way to end the Bang Tango chapter of my life. Until two days later I received a call from Joe Leste asking me if I would be interested in playing in front of 20,000 people the following day at the M3 festival in Maryland. I couldn’t say yes quick enough and proceeded to rent a car and drive 10 hours straight to Maryland for the gig. It was definitely one of the most defining moments of my life and just was beside myself. From there, they kept on having me come out to their shows to play guitar with them and I sort of became an auxiliary member of the band. I owe it all to Rowan Robertson though, we hit it off so well personally and musically and he really enjoyed having another guitar player in the band and he is still one of my best buds to this day.

As for why I left Bang Tango, it was just time. If I remember correctly Rowan and I both quietly left at the same time and began pursuing other things. I still hold the band and its members in a high regard and will always have a big piece of my heart. The band had since reunited with its original line up and it feels amazing to just sit back and be a fan.”

In terms of his favourite moments in Bang Tango, Fortier indicated: “The whole time was my favorite time to be honest. It was such a blast and I absolutely loved playing with Rowan Robertson. He’s amazing. One of my favorite moments and probably one of the funniest was when we were playing Salt Lake City, Utah. Joe Leste had just gotten these new cowboy boots that he was going to wear for the show and was still getting used to them. So we were three songs in and it was during “My Favorite 9”, which is my favorite Bang Tango song. There are no vocals during this part and Joe looked over at me while he took a step back and proceeded to fall down backwards into Timmy‘s drum set in slow motion. It was amazing. It felt like it took him five minutes to fall down. One of the stage hands helped Joe back up and he and I looked at eachother and just lost it with laughter. I still chuckle whenever I think about it. The best part was that Joe pretty much demolished Timmy‘s drum set but neither Timmy nor the rest of the guys missed a beat in the song. Then after the show I asked Joe about it and he told me “You know, all I could think the whole time I was falling was ‘how long is this going to go on for and how soon am I going to be eye to eye with Timmy?””

You can read the rest of the interview with Drew Fortier at All Music / All Bands‘ Facebook page.